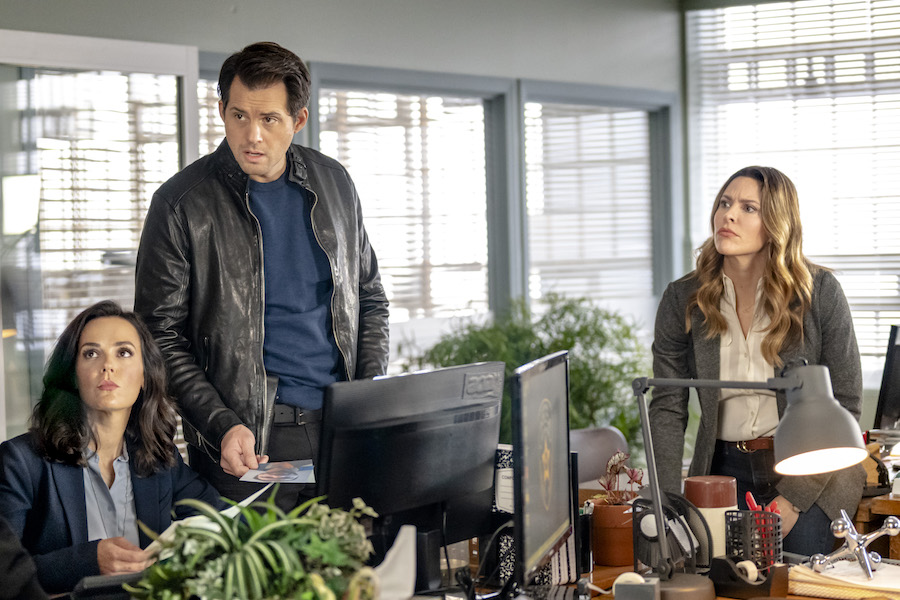 This latest movie is quite a chilling thriller!

What Is Hallmark’s Mystery 101: Killer Timing About?

According to the Hallmark press release, synchronicity becomes more than just a part of her lesson plan when Amy (Wagner) is drawn into a series of loosely linked crimes coinciding with the escape of the serial killer Travis (Polaha) arrested in Chicago. As Amy and Travis work to discover who is behind an attack on Travis’ life, matters are further complicated when his FBI agent ex-wife Kate (Cahill) comes to town to aid in the investigation. As the danger escalates for everyone involved, Amy and Travis will need to find the connection before it’s too late.

Before Christmas, there were some hints that Erin Cahill was visiting the Mystery 101 set. Even Jill Wagner revealed that Erin was going to play Travis’ ex-wife. But, now that the movie has been announced, Erin has happily shared a few details about her guest appearance.

On Instagram, Erin wrote “Excited to announce my next project! It was a true joy to play opposite these two in this super fun and it chilling story! It airs March 21st on @hallmarkmovie. So much love for this cast, crew, and producers. This week’s #fcf (Friend Crush Friday). Happy Friday to YOU, wonderful ones!”

On Twitter, Erin relayed how there seems to be a lot of synchronicity with the word “time” in her recent movies. She wrote, “I can’t seem to escape projects about timing or with “time” in the title…So excited and honored to be in this @hallmarkmovie w the wonderful Kristoffer Polaha and Jill Wagner! #Hallmark #mystery101.”

If you happened to catch Wonder Woman 1984, you surely saw Kristoffer Polaha. Without spoiling the movie for those who have yet to see it, his role is rather important and Hallmark fans will certainly not miss him! He will soon be in other feature move, Jurassic Park Dominion, in another nameless role. That should be released in June 2022.

When Can You Watch Hallmark’s Mystery 101: Killer Timing?

Mystery fans can catch the premiere of Hallmark’s Mystery 101: Killer Timing on Sunday, March 21 at 8 p.m. Eastern. Catch encore showings on Monday, March 22, at 6 p.m., Wednesday, March 24, at 8 p.m., and Friday, March 26, at 10 p.m. Eastern, on Hallmark Movies & Mysteries. Always be sure to check listings in case of a time change.

Also, on premiere night, be sure to tweet along with the Mystery 101 stars and fans, as the movie airs. This is a lot of fun to connect to your favorite Hallmark stars.