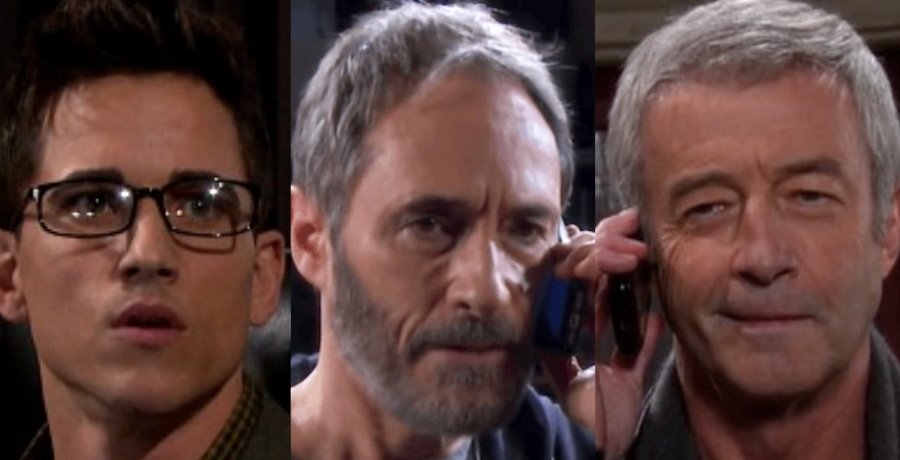 Days of Our Lives spoilers two weeks ahead from Monday, February 8, to Friday, February 19 show Orpheus (George DelHoyo) and Clyde Weston (James Read) return to stir the pot. Plus, the writing is on the wall for dark Titan intern Charlie Dale (Mike Manning) in the coming weeks on the NBC soap.

Days of Our Lives Spoilers: Abby Moves Back Into The Mansion – Gwen Needs Their Shared Daddy’s Help

Days of Our Lives spoilers show Abigail  Deveraux (Marci Miller) planning a big move. This week, Chad DiMera’s (Billy Flynn) wife starts to soften her stance on ending her marriage and moves back into the DiMera mansion.  Abigail spent weeks living with her parents, Jack Deveraux (Matthew Ashford) and Jennifer Horton (Cady McClain), at the Horton House after learning Chad bedded down the nanny turned sister. However, she’s not ready to throw her marriage in the toilet. But does her move mean she forgave Chad or even trusts him?

Days of Our Lives spoilers confirmed Gwen Rizczech is Jack’s daughter. This week Gwen also earns from her newfound dad, Laura Horton (Jaime Lyne Bauer), played God. Her actions kept Jack from ever knowing he had an older daughter. Now Gwen pays Laura a visit to give her a piece of her mind. The chat gets heated fast, and Laura suffers a terrible accident. Now Gwen needs Jack’s help to get her out of this mess she in. Will Jack step up to protect his new daughter even if it causes more trouble with his wife and other children?

DOOL Spoilers: Steve Puts A Ring On It – Xander Gets Down On Bended Knee

It Valentine’s Day this week in Salem. Days of Our Lives spoilers show love is in the air. One couple weds, and another gets engaged. First, Steve Johnson (Stephen Nichols) plans a romantic surprise wedding for his “sweetness” Kayla Brady (Mary Beth Evans). The couple’s currently divorced but happily reunited. Since Valentine’s Day is their last wedding anniversary, Steve decides this is the perfect day to make his relationship with Kayla official as husband and wife.

Other Days of Our Lives spoilers show Xander Cook (Paul Telfer) wants nothing more than to spend forever with his love Sarah Horton (Linsey Godfrey). They’ve rebuilt their relationship after the baby swapping fiasco a few years back. Now, these two are poised to make it for the long haul. Look for Xander to ask Sarah to be his wife this year as Valentine’s Day approaches in Salem.

Days of Our Lives spoilers in two weeks say Allie Horton (Lindsay Arnold) and Lucas Horton (Bryan Dattilo) has a run-in with her attacker, Charlie Dale. This is the first time Lucas and Allie have encountered him since she realized he was the one who raped her.

Days of Our Lives spoilers know a WhoDunnIt is brewing for February sweeps. Certainly, there are many people in Salem that would love to see Charlie Dale dead. After all, he attacked Allie. Let’s forget he’s also kidnapped and drugged his own mother. He’s not the mild-mannered bumbling intern we first met many months ago. Now Lucas and Allie are witnessed verbally attacking the accused rapist. So look for them to top the suspects’ list should he turn up dead in the coming days.

Days of Our Spoilers tell Orpheus and Clyde Weston to make a return to Salem two weeks from now. Up until now, Ciara Brady’s (Victoria Konefal) captor Rhodes (James Downs) was believed to be only working with Vincent Belman (Michael Teh). Now new spoilers say Orpheus has a sinister connection to the man holding Ciara prisoner.

It’s no secret Orpheus blames Ciara for his son, Christian Maddox, also known as, Evan Frias’s (Brock Kelly) confession to killing Jordan Ridgeway (Chrishell Stause).  Additionally, he’s using that as leverage over Clyde to do his bidding as well. No doubt Ben Weston (Robert Scott Wilson) will go ballistic if he learns his dear old dad is involved in any way with his wife’s kidnapping.