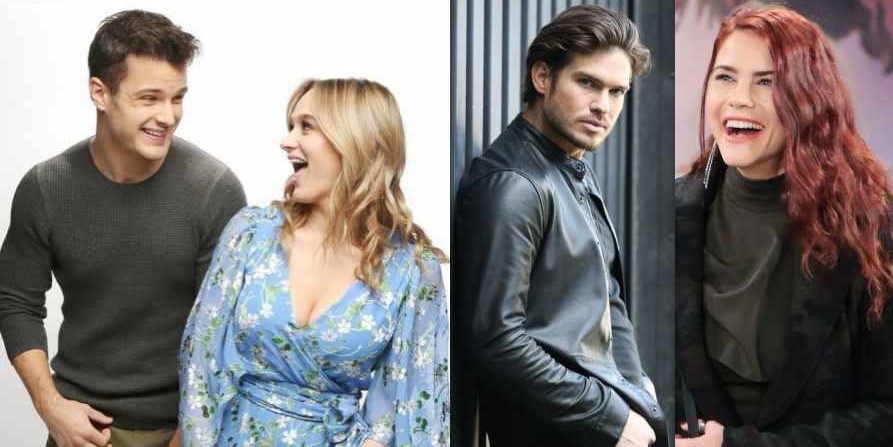 The Young & the Restless head writer Josh Griffith has promised fans lots of drama, showdowns, and shocks over the coming week. The drama includes Kyle, who is about to see his New York City past come back and bite him where he sits. This is all thanks to Sally and Summer’s ongoing feud and aided by Theo. In other spoilers, Sharon, Rey, Chelsea and Adam will have their own drama.

Kyle’s deep dark secret on The Young & the Restless

Fans are sorely disappointed that Chance Chancellor (Donny Boaz) has had to leave the soap. Theo (Tyler Johnson) isn’t as popular with fans. Despite this, he is certainly set to liven up The Young and the Restless.

Thanks to Theo, Kyle (Michael Mealor) is set to become collateral damage in Summer (Hunter King) and Sally’s (Courtney Hope) ongoing feud. Theo reveals a tasty morsel of information about Kyle and his life in New York City. He is set to feel cornered by Summer, Sally and Victor (Eric Braeden). This leads to his confession about having fathered a child with a married woman.

Obviously, this isn’t something that Summer, particularly, wants to hear. However, this revelation is only the start of Kyle’s life unraveling. This relates to a bigger story relating to Kyle’s baby mama and her scary husband.

Since Sally first arrived in Genoa City, Jack (Peter Bergman) has been a close ally.  This growing bond between the pair is likely to raise quite a few eyebrows in Genoa City. However, his reaction to the news that she is using Kyle in her feud against Summer will be a shocker. In fact, it will surprise viewers and as well as those close to Jack.

Meanwhile, as the secret about Kyle falls into Sally’s lap she has no qualms in using this to her advantage against Kyle and Summer. However, Summer luckily has a formidable resource at her disposal. Phyllis Abbott Newman (Michelle Stafford) is more than happy to take on Sally Spectra. This can only get interesting for The Young & the Restless in coming episodes.

Sharon, Rey, Chelsea and Adam on The Young & the Restless

The growing bond between Adam (Mark Grossman) and Sharon (Sharon Case) is set to be exposed in a very public way. This will set off a dangerous chain of events for Chelsea (Melissa Claire Egan) and Rey (Jordi Vilasuso). Victor also won’t like to see Adam relying on Sharon so much.

Along the way, Chloe (Elizabeth Hendrickson) will find herself getting through to Chelsea. In fact, Chloe is prepared to stop at nothing to protect her pal.

Keep up with all the drama on The Young and the Restless, weekdays on CBS. Also, watch for the latest spoilers on TV Shows Ace!