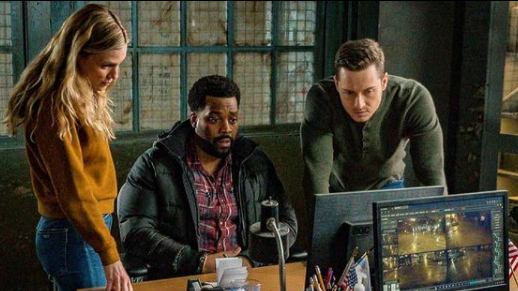 This week’s episode of Chicago PD saw Burgess make the huge decision to foster Makayla, the little girl she helped save in episode three. The episode also hinted at what could happen for Burzek this season. Adam keeps asking Kim to consider dating him again, but Kim wants things she doesn’t believe Adam is ready for. Will Kim fostering Makayla and possibly adopting her make Adam step up and be the man Kim needs or will this end the fan-favorite couple forever?

The sad thing is that the promo and the official press release do not provide fans much information about what to expect. But the summary says: Halstead and Ruzek try to infiltrate a crime ring and encounter a complicated situation. The team recruits an unlikely ally to solve a murder.

Well, there isn’t a lot to go on as far as the promo and summary for the episode are concerned. So how will Jay and Adam try to infiltrate the crime ring? And what kind of criminal activity is this particular group involved in. In the promo, Adam seems to be holding up a bag of what looks like drugs, fairly common. This is a fairly standard troupe drugs and gangs. But Chicago PD could benefit from trying something not so standard. Fans are likely to see some attempts at undercover work, which they have not seen in a while.

The second part of the summary is what stands out, and the promo gives fans a hint as to who the unlikely recruit will be. A desperate father has been doing his own investigation into the death of his son. The man clearly does not believe justice has been served or he does not trust the Chicago police to find out what happened to his son. So, he unwittingly steps into a raid that Intelligence has set up and gets himself into trouble.

Chicago PD is playing with our emotions

The next few episodes are going to be interesting to watch. Jay and Hailey figuring out their new relationship dynamic and how it will affect them as partners on the job. But Hailey is already lying to Jay about talking to her father, and pushing Jay away when he tries to help her.  So, the personal side of things is not off to a great start for the couple.

Marina Squerciati talked with ET about how Burgess’s decision to foster Makayla might affect the future of Burzek. And she also spoke about a new character that will be coming into the unit. This new character will be Officer Jalen Walker, played by Cleveland Berto. Squerciati did not elaborate on the character but she did say that Walker and Atwater take some swipes at each other. But there is no new news about when Berto will make his Chicago PD debut.