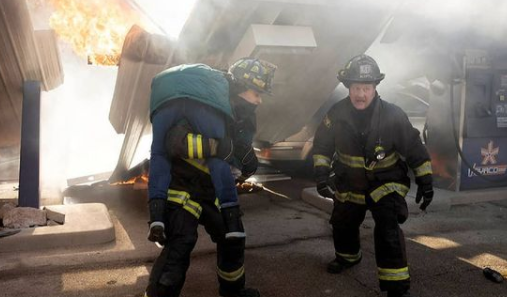 This week’s episode of Chicago Fire was a new direction in the style of storytelling. They only focused on one call and two characters for the entire episode. Focusing the episode this way made the rescue felt realistic and unrushed. There was also no jumping between character storylines to confuse things and break up the story.

However, the next episode is looking to go back to the standard format of the show with multiple storylines. But maybe the new style will become a more frequent occurrence. The promo for episode six shows Gallo disregarding an order from Casey. Although nothing bad seems to happen, Casey is not happy with him at all and sends him home. But is it for good?

Anyone getting déjà vu?

Watching this promo may feel like a repeated storyline for fans. And it should. This is not the first time Gallo disobeyed a direct order from Casey. Check out the promo for Chicago Fire 8×06! Looks a little too similar to the promo for the new episode, doesn’t it?

Well, the difference this time that Gallo is not sorry for his actions on the call this time. In Season 8 he disobeyed orders because he wanted to save the family of a little boy that reminded him of himself. After the call, he felt guilty for disregarding Casey’s order and ended up having to confront some personal demons. But in this episode, he acts to save a victim and disregards an order in the process that could have ended with him being seriously hurt. But instead of understanding why Casey gave the order he did, Gallo becomes defensive. He argues with Casey that his quick action saved the victim and him being quick to act was the reason Casey hired him. That definitely does not impress Casey at all and he tells Gallo, “Pack your bags and go home.”

Now does that mean that Casey is throwing in the towel on Gallo? That seems highly unlikely given that Alberto Rosende was promoted to a series regular on Chicago Fire this season. And firing Gallo would be kind of extreme for a house that is known for going rogue on multiple occasions. But sending him home to let him cool off and consider what could have happened doesn’t seem like a bad idea.

But other than the obvious Gallo drama to come next week, NBC released further spoilers for episode six. Including: “Kidd feels a strain in her relationship with Severide,” and “Brett and Mackey find themselves searching for answers following a series of suspicious calls.”

Ok, so Chicago Fire is gonna drag out the Stellaride angst for a few more episodes. Great, fans can’t wait for Haas to try to break this couple up, again. As far as the storyline with Brett and Mackey that could be anything really. Suspicious calls for Ambo is not a lot to go on.

But what some fans are really interested in seeing is who between Brett or Casey who will go on a date with someone new first. Love interests for both of them were introduced in episode four, so anything could happen in episode six. Brett may take the plunge first in a desperate attempt to move on, but Matt is the more likely candidate.