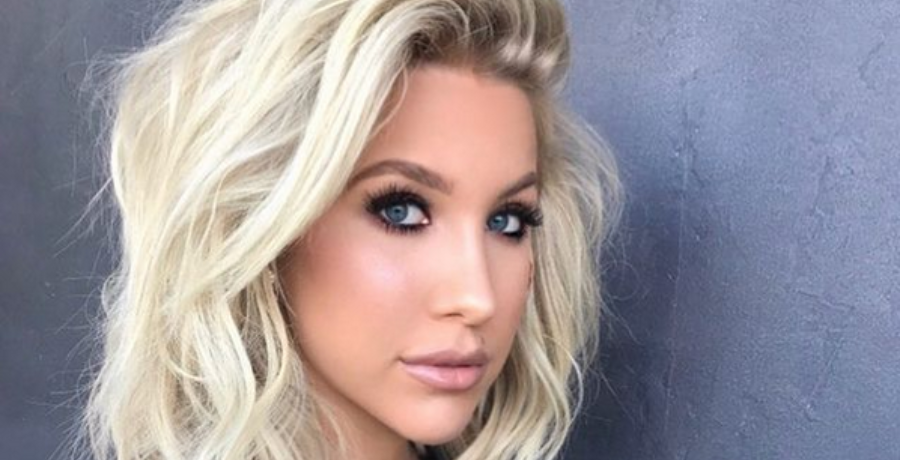 Savannah Chrisley shared a makeup tutorial. The Chrisley Knows Best star wanted to reveal what it takes to get her “fun everyday” look. But not everyone was on board with it. Last year, Savannah finally launched her Sassy by Savannah cosmetics line. It has everything you need for the eyes, lips, and face.

On her Sassy by Savannah site, she sells eye kits and lip kits. She also has a full face palette, which is currently sold out. Obviously, that’s the most popular item in her store. Over on Instagram, Savannah loves to share some of her beauty and skincare secrets.

On Wednesday, February 3, Savannah Chrisley posted a new video. She wanted to share a makeup tutorial on how she gets her “fun everyday look.” Of course, the reality star gets a little help from makeup artist Paige Higgins, who does most of her looks. In the caption, Savannah also teased that more products are on the way along with some restocked items.

It appears that her popular face palette will be making a comeback. Savannah hinted that “March couldn’t come fast enough.” In the seven-minute video, she does most of her face while Paige Higgins does the rest. Even though she gets a little help from her friend, she claims that her fans and followers can pull this look off at home.

So far, Savannah’s video received over 78,000 views. But fans aren’t sold on the makeup tutorial. Some claim that Savannah Chrisley wears too much makeup. They argue that her “fun everyday” look requires too many products.

“Normal people don’t have that much time, and an artist to achieve this look!” one fan wrote. “SO unrealistic!”

“You are beautiful but I think your blush is a bit too dark,” another fan commented. They hinted that the beauty maven was wearing too much makeup. “Your blush is too high,” a follower chimed in. They meant that Savannah’s makeup artist put the blush too high on her cheeks.

Others are in awe over her beauty

Overall, Savannah Chrisley received a positive response from her makeup tutorial. Some of her fans and followers fell in love with her looks. They couldn’t believe how beautiful she looks with and without makeup. It was a good sell for her cosmetics line since it has fans asking about certain products:

Savannah revealed that a restock is coming by March. And there will be more products to come as well. It might include a standalone foundation or mascara, or at least a set of makeup brushes. Whatever Savannah is using, fans want it.

What are your thoughts on Savannah’s makeup tutorial? Sound off below in the comments.