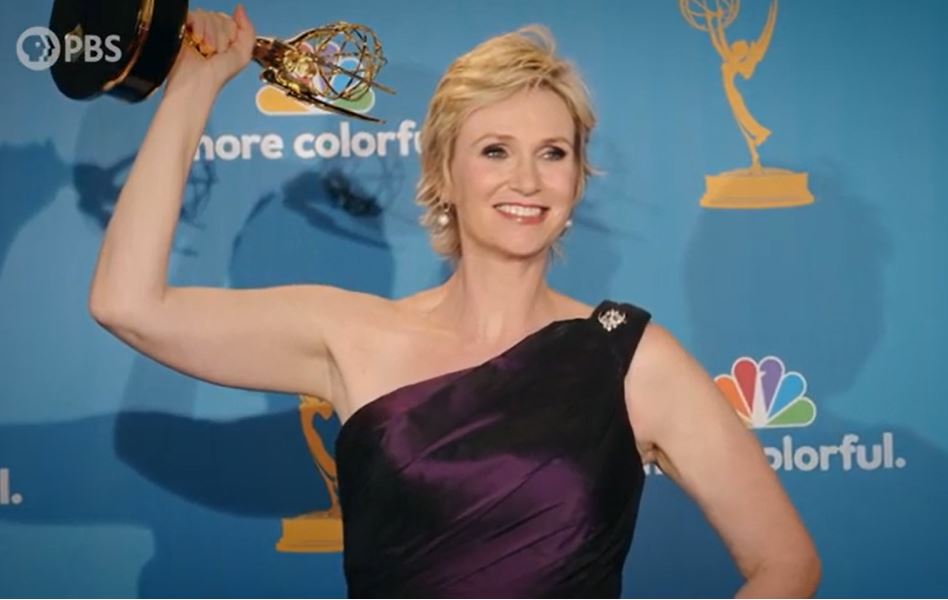 The series host Dr. Henry Louis Gates Jr. opens the video as he talked to actor Jane Lynch about growing up in an Irish-American community in Chicago.

As to be expected, Lynch regaled Gates with a rollicking story about her early days before she was a Hollywood star.

Speaking to Dr. Gates, Lynch recalled the boisterous fun she had in her Catholic Church.

Dr. Gates said: “Everything began in church where she felt at home for reasons that weren’t exactly spiritual…”

Jane clarified the history of her earlier days.

She said: “We went to church every Sunday but as far as being religious and praying and we weren’t
that…um… church was very social for us my parents did plays at church and it was the first place that I got to go with them where I really enjoyed myself.”

Dr. Gates noted that he and many folks “Don’t think of Catholic Churches is having a lot of performances.”

He asked: “Is this like a Black church thing?”

Laughing, Jane said: “No no the Irish-Catholics…yeah we put on plays and we drink, oh absolutely.”

Spanning the globe, the series compiles family trees in these new episodes that trace throughout the United States and Canada; across Europe and Africa; and more. Episode to episode, audiences will meet guests’ ancestors who were businesspeople and bootleggers, war heroes and criminals, farmers and immigrants, the persecuted and the persevering under the most extraordinary circumstances. Together, the arc of each guest’s family personalizes history while emphasizing the human connections that unite everyone.

The experts behind the discoveries

Assembling the family trees and narratives with the commentary and hosting by Dr. Gates are DNA expert CeCe Moore (Founder, The DNA Detective and host of ABC’s The Genetic Detective, and lead genealogist Nick Sheedy, carrying on the work of founding series genealogist Johni Cerny (Founder, Lineages), who unfortunately passed away in early 2020.

It takes a village to pay for a PBS series

Season Seven of the award-winning series is provided by Ancestry and Johnson & Johnson. Support is also provided by Gordon and Betty Moore Foundation, The Carnegie Corporation of New York, Candace King Weir, The Zegar Family Foundation, Lloyd Carney Foundation, and by The Inkwell Society and its members Felicia A. and Benjamin A. Horowitz Fund; Demond Martin; Sheryl Sandberg and Tom Bernthal; Jim and Susan Swartz; Anne Wojcicki; John and Jennifer Fisher; Fletcher and Benaree Wiley; Gwen and Peter Norton; and Darnell Armstrong and Nicole Commissiong. Major support is provided by the Corporation for Public Broadcasting and PBS.

Producers of the series

Serving as both host and executive producer, Dr. Henry Louis Gates, Jr. is the Alphonse Fletcher University Professor at Harvard University and director of the Hutchins Center for African and African American Research.

“As we enter our 7th season on PBS, Finding Your Roots continues to illuminate the past by unlocking the histories contained in our guests’ DNA.  Building on traditional paper trail research, genetic genealogy is a powerful tool for reconnecting branches on family trees eroded by silence and time. It also underscores one of the central themes of our series — that all of us, in one way or another, descend from immigrants whose travels across space are part of the larger human story of movement either through necessity, brutal force, escape, or the search for a better life.”

WETA is the leading public broadcaster in the nation’s capital, with educational initiatives and with programming on television, radio and digital. WETA Washington, D.C., is the second largest producing-station of new content for public television in the United States, with productions and co-productions including PBS NEWSHOUR.

McGee Media was founded by award-winning filmmaker Dyllan McGee to produce documentary content that is “compelling and immersive.”

Inkwell Media was founded by Henry Louis Gates, Jr. to produce documentary films about the African and African-American experience for a wide audience.

Get Social with Finding Your Roots