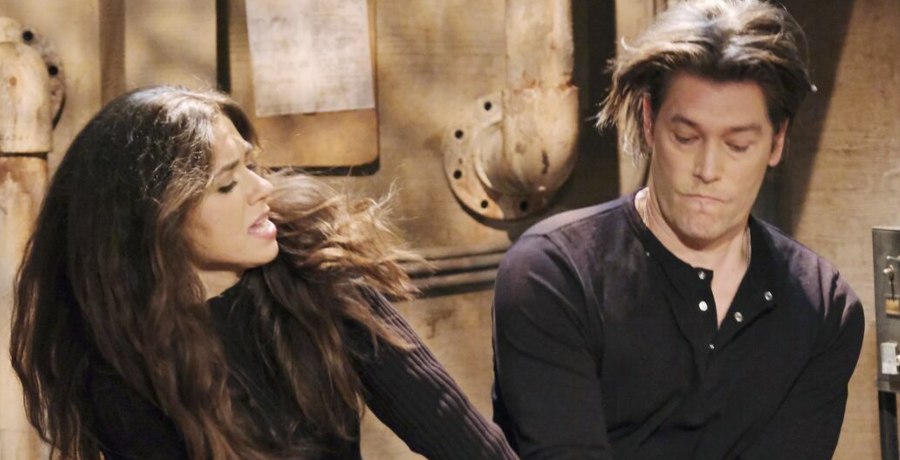 Days of Our Lives spoilers reveal Ciara Brady (Victoria Konefal) struggles to break free from captivity. Vincent Belman’s (Michael Teh) henchmen Rhodes (Jason Downs) vows to continue the mission he was hired to. After all, the checks are still coming, so why release his pretty hostage?

However,  Ciara Brady is over being held behind plexiglass. This week the new wife of Ben Weston (Robert Scott Wilson) attempts to break free and get back to her husband and family on the NBC soap.

Days of Our Lives Spoilers: Ciara Brady Held Against Her Will

Days of Our Lives spoilers confirm Ciara Brady is very much alive. Although Vincent is behind bars for confessing to her murder, Ciara managed to escape relatively unharmed. However, as she fled the fiery explosion that she appeared to perish in, she stumbled upon Rhodes. She thought he was her savior. But he turned out to be her nightmare.

Days of Our Lives spoilers know Vincent hired Rhodes to keep Ciara safe but hidden from her husband Ben and her family back in Salem. It was part of his twisted plan to get revenge on Ben for killing his fiance Wendy Taylor (Denise Duff). But his plans went awry, leaving Rhodes to continue the mission as planned. Since the checks kept coming, Rhodes stayed teh course. However, Ciara Brady is done with being held as a prisoner. Although she’s not being harmed and is well cared for, she’s once again held against her will. Now Ciara struggles with her captor and makes a break for it, say Days of Our Lives spoilers.

Days of Our Lives spoilers know Ben Weston struggles to accept his beautiful wife died in the explosion. Since her body wasn’t found, there’s hope she survived. The only physical evidence was her rings at the scene. Even her detective mom, Hope Brady (Kristian Alfonso), failed to buy her only daughter died that night.

Days of Our Lives spoilers say Ben will share his vision that Ciara is alive with Claire Brady (Isabel Durant). Certainly, Claire would love her aunt (and BFF) to return alive. They were just starting to rebuild their friendship. Ben really has leaned on Claire these last few months. She, along with her grandmother, Dr. Marlena Evans (Deidre Hall), has been Ben’s rock as he deals with his grief.

Days of Our Lives: Susan Banks Breaks The Case

According to Days of Our Lives spoilers, Susan Banks (Stacy Haiduk) is heading back to Salem. Although she’s summoned Kristen DiMera (also Stacy Haiduk) to run interference between Brady Black (Eric Martsolf) and Chloe Lane (Nadia Bjorlin), she proves to be helpful to Ben Weston’s quest to find his wife.

Susan’s premonition and visions of Ciara being alive is the push and validation Ben’s been hoping for. So with Susan’s premonition, Ben sets off to find his wife. Ciara and Ben are certainly connected. Just as Ben launches his search, Ciara also attempts her getaway from Rhodes. And so begins the great journey of reuniting “CIN” on the NBC soap.