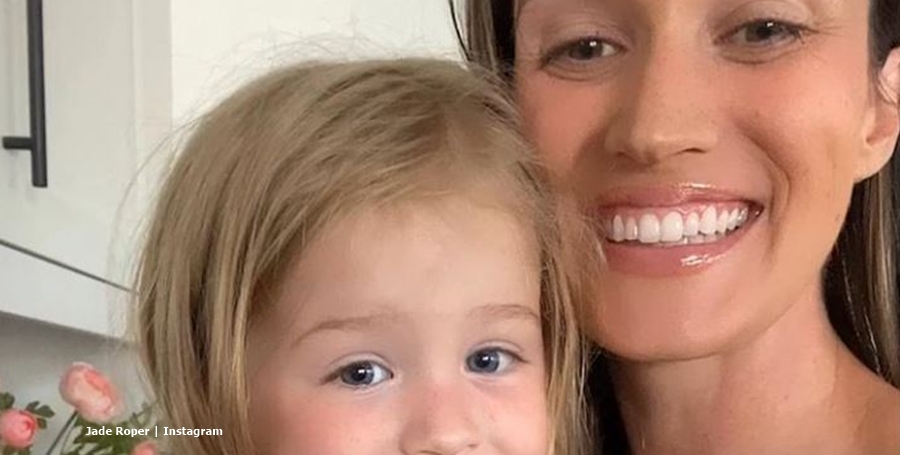 Emerson Tolbert, Jade and Tanner’s little girl grows up fast and she started attending preschool part-time this week. Jade shared a photo of her cute daughter all ready for school with her little pink bag. Actually, apart from a blue denim jacket, Emmy went with pink all the way. She smiled and waved sweetly at the camera. This sounds like a huge milestone for the Bachelor in Paradise couple’s first baby.

Emmy Tolbert starts preschool, Jades’ got big hopes for her

Usually, when preschoolers head off for their first day, their moms become very emotional. Jade says she feels some emotion, but in her post, she mainly sounds very happy for her daughter. In her caption, the Bachelor in Paradise alum told fans that she and Tanner jointly made the decision. She’s three-and-a-half now. That might sound a little bit young, but it’s about the right age. And they believe she’s “ready” for it. But she only attends part-time for now. Tanner and Jade “want her to be in an environment where she flourishes.”

Emmy Tolbert’s mom also said, “I’m also so excited for her to play and experience new friends and activities.” Plus, said about her daughter on her “big milestone” day, “I’m so so proud of our sweet Emmy girl!”

Many fans reacted in the comments section of the post.

Fans react to the news about Emmy

One BiP fan asked how Jade’s daughter “coped with the drop-off.” Jade replied, and said, “she was so excited the whole drive, then she got a little shy and quiet when we walked in.” Notably, Emmy found some new friends and they started coloring together. But, “she got upset when we left. I saw the teacher wiping Emmy’s tears with a tissue as we walked out.” However, Jade added, “😢😢 …she loves making friends, so I know she’ll love it soon enough! 💕💕”

Lots of fans who already went through the same thing as Jade, Emmy Tolbert’s mom, reassured her that soon, she’ll become used to the new routine and look forward to preschool. Fortunately, we reported that Jade Roper Tolbert told her fans that she potty trained Emmy some time ago. That becomes a huge factor when it comes to making decisions about preschool.

When should kids start preschool?

Thebump.com reports that most kids seem ready for preschool between the ages of three and four. “Most preschools will typically have separate classes for three- and four-year-olds, with three-year-old children attending fewer days or for fewer hours.” The objective aims at preparing the kids for kindergarten. The outlet also notes that potty training’s crucial as “many schools have a “no diaper” or “no Pull-up” policy for preschool.”

Hopefully, Emmy Tolbert falls in love with school and soon gets used to the idea of temporary separation from Jade and Tanner.