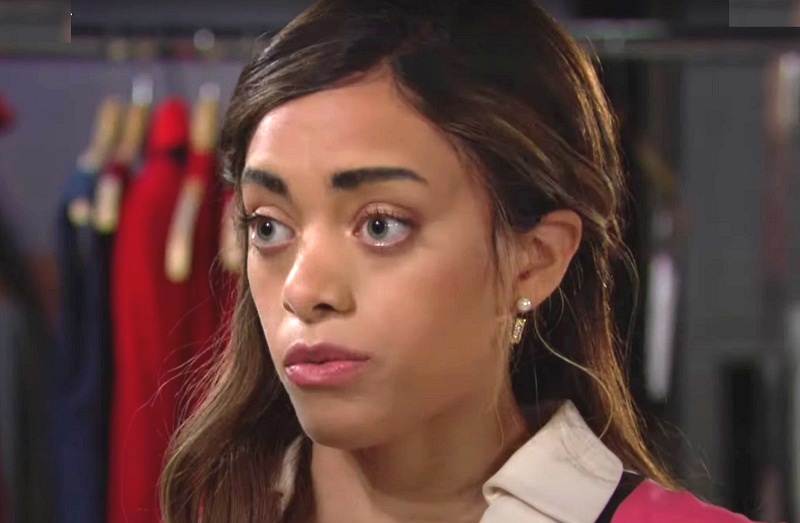 Bold and the Beautiful fans got to see Zoe do a complete turn around after she was caught by Ridge trying to get Zende into bed. But she banks on Ridge not running to Carter and she couldn’t be more wrong on that thought.

Ridge started his best friend routine with Carter on Monday’s Bold and the Beautiful. However, on another floor in the Forrester Creations building a bubbly bride shows up to talk to Zende.

Bold and the Beautiful – Zoe Buckingham Stays True To Reputation

Zoe Buckingham (Kiara Barnes) just about demanded Zende Forrester (Delon de Metz) spend the night with her. Unfortunately, this Bold and the Beautiful scene might be the end of Zoe’s pending marriage to Carter Walton (Lawrence Saint-Victor).

Bold and the Beautiful spoilers suggest Zoe’s tendency to want it all might be the demise of her career at Forrester Creations as well. She had no idea Ridge Forrester ( Thorsten Kaye) overheard her heavy flirting with Zende not until it was too late.

At the same time Zoe started to make a play for Zende, her sister Paris Buckingham (Diamond White) filled in some backstory. She rehashed some of Zoe’s past as she condemned her sister for what she is doing to Carter. It sounds like Zoe needs to play these games from what her sister says to her.

Ridge informs Carter that his bride-to-be attempted to seduce Zende. All the elation from Carter’s face drains as Ridge pulls the plug. On another floor, Zoe is talking to Zende as if she suddenly became a Stepford Wife.

Bold and the Beautiful spoilers indicate that for Zoe, it’s suddenly all about her love and commitment for Carter. However, despite Zende confused over Zoe’s sudden change, he seems happy to hear this.

Carter feels his future drain away with every word Ridge says about Zoe. However, she has no idea this goes on as she scrambles to get Carter to marry her. Still, Bold and the Beautiful spoilers hint at Zoe soon fighting a losing battle with Carter.

Bold and the Beautiful – Is Carter A Forgiving Man?

Bold and the Beautiful spoilers suggest Carter might be a forgiving man that’s if he didn’t need to battle his best friend’s influence. Zoe puts on a good act and begs Carter to forgive her.

As usual, Bold and the Beautiful won’t put a lid on the plot yet, as Zoe needs to grovel some more while giving Carter some fuel for thought. However, spoilers hint at Ridge not offering his best man stamp of approval on the wedding.

Ridge won’t change his mind about Zoe and that’s not a good thing for Zoe. Carter hangs a lot on what Ridge thinks. Unfortunately for Zoe, Carter is Ridge’s best friend and if he doesn’t marry her, the rest of her world will probably crumble. There’s a good chance her cushy job at Forrester Creations goes down the drain with her almost marriage.