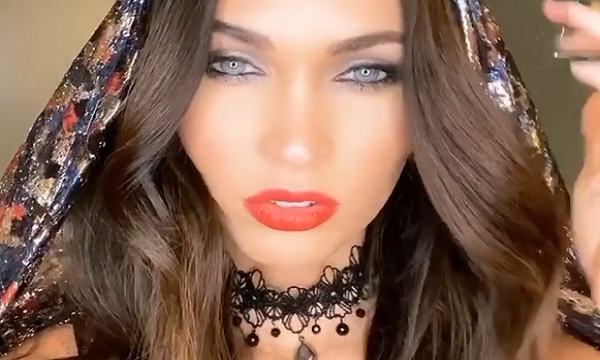 Megan Fox does not approve of the sudden engagement rumors. Instead, she’s beating the media to the punch. The 34-year-old actress flipped off the rumors on Saturday, January 20.

The sexy stunner took to her Instagram Stories. She shared a photo of her hand wearing a vulgar ring. Machine Gun Kelly’s girlfriend wore a ring that read “F*** You.” She even showed off her yellow French tips and included the side-eye emoji, which revealed her frustration at the engagement rumors.

This post just comes hours after paparazzi photos of the Hollywood star wearing a giant ring on that finger caused the engagement rumors to swirl. Media sites speculated whether Machine Gun Kelly popped the question to Megan Fox. The two made an appearance before the rapper performed on Saturday Night Live.

Megan Fox and Machine Gun Kelly have no marriage plans

Machine Gun Kelly and Megan Fox have been heavily dating since March 2020. Since then, it seems like the pair have been inseparable. Their relationship went to the next level after Megan’s ex-husband, Brian Austin Green, confirmed the two were separated in May. An engagement wouldn’t be too much of a reach since Megan and MGK moved so quickly thereafter.

However, an insider told People that the couple “are very serious and plan on spending the future together. There will be an engagement at some point, but they are not engaged now.”

At the moment, the Transformers star wants a divorce from her estranged husband. The duo shares three children, Noah Shannon, 8, Bodhi Ransom, 6, and Journey River, 4.

“Megan needs her divorce to be finalized before she can fully move on,” the insider explained. “She is very happy though.”

Megan and Brian had a very public breakup. The two often spat on social media. She accused him of being “intoxicated with feeding the pervasive narrative that I’m an absent mother, and you are the perennial, eternally dedicated dad of the year.” But the source told the outlet that the two are on good terms again.

“She is focused on making sure her boys are doing well,” the insider said. “Coparenting has been tricky at times, but everyone is doing better now. Brian has moved on and is happier as well.”

Megan isn’t taking the engagement rumors in stride. But she’s making it clear that she’s happier than ever. The actress took to Instagram to gush about her boyfriend’s appearance on SNL. She said that he gave the “Best performance that show has ever seen.”

What do you think about how Megan Fox reacted to engagement rumors? Share your thoughts with us in the comments.