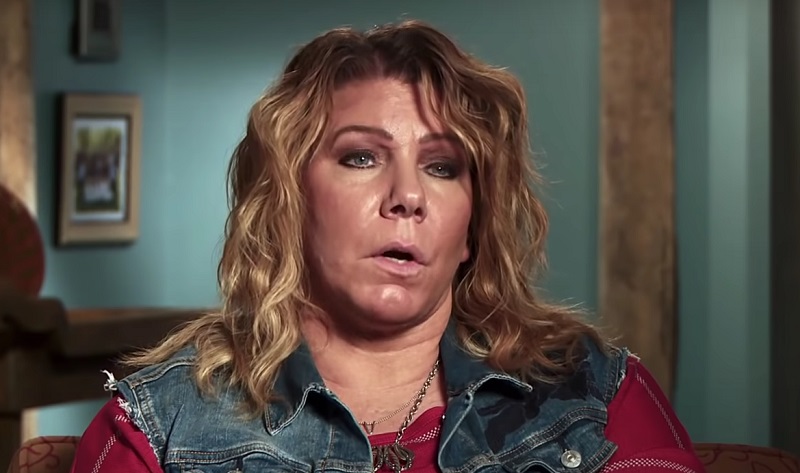 Sister Wives star Meri Brown constantly finds fans pleading with her to flee her shared husband and the plural marriage that made her famous. Many of the Sister Wives fans believe she holds on because she loves Kody Brown.

Meri Brown snapped a selfie with her husband a while back and seemingly shamed those fans who begged her to leave him.

The first lady to marry the Sister Wives patriarch snapped back with that photo and a long paragraph explaining herself. But just one line said it all. She told everyone “I love this man.”

So fans retreated a bit and let Meri do her thing ahead of the new Sister Wives season. However, something Meri posted on Instagram today seems to spark the thought of a possible hidden agenda.

Sure She Loves This Man But…

Before the Sister Wives program hit the national airwaves, Meri was an unknown. It seems people tuned into the show out of curiosity. They heard this guy had four wives and curiosity got the best of them.

Basically, the draw to the Sister Wives show was getting a look at how four women shared one man. Not just in the bedroom, although that was probably the main draw. However, fans seem curious about all the other aspects of their daily life as well.

So they came by the boatloads to TLC on Sunday nights to see Meri and her three Sister Wives navigate daily life with four wives and one husband. Still today, after a decade of seasons have passed, millions tune it. So it is safe to say the show is a success.

Then Came The Fame

Meri never felt as if she fulfilled her life through the first several seasons of Sister Wives. She went back to college even before the show made it to primetime.

Then she lost her job outside the house after the Sister Wives went public with their show. Meri dragged around publicity from this show that wasn’t something her workplace took a shine to.

Meri was looking for something since the Sister Wives viewers laid eyes on her. Even before that, Meri found herself soul searching for what to do as a career. Fans learn this from the book that the Sister Wives wrote years back.

It was that journey of finding herself that led her to that Sister Wives catfishing scheme. But once that was over it seemed Meri concentrated on a career and one she became very good at – selling.

She joined the LuLaRoe family, a brand of clothing she now sells. It didn’t take long for Meri to become a top sales rep for that company.

Then she created Lizzie’s Heritage Inn, the bed and breakfast establishment she owns all alone. It’s a separate venture from her Sister Wives spouses.

This too became very successful. So Meri has two successful businesses and one seems almost impossible for the average person to thrive in, according to comments from fans who tried selling LuLaRoe like Meri Brown.

So, when Meri posted on Instagram recently she shared with fans how her mind wouldn’t shut down to let her sleep. She also told fans how she thought about how lucky she is to be so successful. This kept her mind buzzing and kept sleep from taking place.

However, a big part of that success comes from her fan base. She has millions of followers who buy her clothes. Unlike the average person, Meri has a built-in customer base with her fans.

Lizzie’s B&B is doing well from all accounts. Meri probably doesn’t need to advertise because millions of the Sister Wives fans know she owns this. Many fans make trips to stay there with the hopes of running into the first bride of the Sister Wives clan.

So other than loving her shared husband and this big Sister Wives family, maybe Meri has another agenda for sticking around. The series works as plenty of free advertising for both her businesses.

So why would she walk away and leave all that behind as well?  Kody treated Meri like she was someone he no longer wanted in his life last season. His humiliating words and horrendous put-downs had fans in a verbal attack mood toward him.

Fans were shocked that she not only stayed but came out defending Kody as the man she loves. Then she sounded as if she reprimanded the fans for suggesting she leave.

Well, whatever floats Meri’s boat should be good enough for her fans. However, it does bother them to hear Kody talk about Meri as the woman he wished he never married.

Although the fans can be happy for Meri’s success. However, remember without the Sister Wives series fame she probably wouldn’t be a household name making it a bit easier to sell her clothing and rent rooms at the inn.

Do you think she’s staying in the relationship out of love or out of fame? Let us know in the comments below.