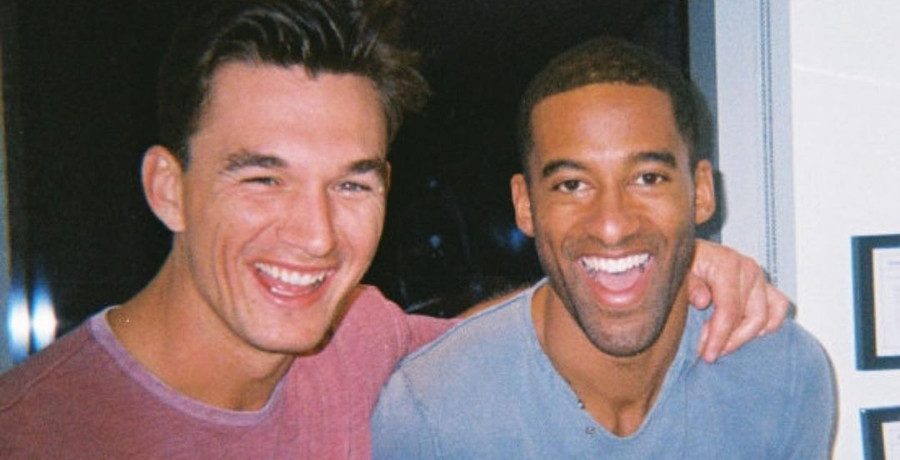 Bachelor Nation fans know that Matt James and former Bachelorette contestant Tyler Cameron are best friends. The two even share an apartment together in New York City. Matt James took to his Instagram on January 31 to celebrate his friend’s birthday. In typical bromance fashion, he trolled his BFF with the most embarrassing photos and videos possible.

Matt James and Tyler Cameron have been friends since their college days. They both attended Wake Forest University in North Carolina. In fact, as student-athletes, they became fast friends on the football field. After graduation, they moved to New York City together, where they still share an apartment.

The current Bachelor posted a snap of Tyler Cameron sprawled out on the bed of their very messy first apartment.

The two Bachelor Nation stars – along with former Bachelorette Hannah Brown – all ended up in quarantine together during the height of the coronavirus pandemic. In their downtime, the bros played a lot of video games. Matt James shared a video of him ‘trolling’ Tyler Cameron during a video game battle.

“Friends That Train Together Stay Together”

Anyone who follows Tyler Cameron on social media knows he is into staying fit. As roommates and best buds, it’s no surprise that Matt James and Tyler Cameron work out together. In one photo of the duo jogging together, Matt James wrote, “Friends that train together stay together.”

Matt James and Tyler Cameron have fun on the water, too. The fast friends enjoyed a fishing trip and Matt James is always willing to lend a hand. In a hilarious video clip, Matt James does his absolute best to help Tyler reel in something from the water. Matt jokes that all they caught was “seaweed and trash.”

It seems like Matt James and Tyler Cameron have a lot of fun together. In one clip, the two take a synchronized dip in the water worthy. Do we hear the Olympics calling?

Surprisingly, Tyler Cameron has yet to show up during Matt James’ season as The Bachelor. He is cheering his bestie on from the sidelines. In fact, E! Online reports that it was Tyler’s mother who nominated Matt James for The Bachelorette in the first place.

Matt James paid tribute to Tyler Cameron’s mother in his Instagram post. Alongside a photo of the two from their college years, he wrote to Tyler, “Mama would be proud of the man you’re becoming [heart emoji.]”

In the next episode, Matt James is confronted by a harsh reality about a possible life with frontrunner Abigail Heringer. The Bachelor airs Mondays on ABC.