Things got wild on Twitter Saturday night when Bachelor in Paradise alum Dylan Barbour answered questions about The Bachelor production. He spilled a lot of tea and also shed some light on a few rumors that have been circulating for quite some time. One interesting piece of information he divulged involves Hannah Brown and Jed Wyatt. Dylan held nothing back as fans fired away with questions. Find out what he had to say below.

Dylan opened up a Q&A session on Twitter Saturday night spilling a lot of tea on The Bachelor. Nobody is really sure what set off his Twitter rant, but it was very informative. He started out saying, “Cancel ABC and the bachelor Kinda wanna air out their dirty laundry mom got me riled up.” Someone asked him why he was so riled up. Dylan said, “This public figure world is fake, and sometimes it needs to be called out. #HoldTheLine.”

Fans then started firing away with questions. One asked him if Peter Weber was really as bad as everyone says. Dylan said no. Fans asked him which person got screwed over by production the most during his season. He said “Jed.” He was then asked if he was saying Jed never cheated on Hannah Brown. Dylan replied, “yes.” If that’s true then Jed took a lot of heat for nothing!

Dylan also confirmed that production tells the lead who to keep on the show. They manipulate situations to keep drama flowing throughout the season. When asked if they actually hire on contestants to be the villain Dylan said he’s always wondered the same thing. He does believe it’s possible. He did say villains are awarded in screen time, not money.

However, while the show does try to persuade the contestants to do what they want, Dylan said contestants can tell the producers no.

Dylan also says production doesn’t care about people. And, he’s not happy with how Heather Martin has been treated in regards to appearing on Matt James season of The Bachelor. He said, “The bachelor producers screwed heather over. She must be protected. Just know I’m ready to go to battle against them and these mean girls.” Dylan talks bullying and mental health on the show

In a final slam, Dylan said, “My last thought: they need you until they don’t. Each person is a pawn in a larger scheme, and they do not have contestants best interests in mind. Mental health is not a concern. Multiple people develop issues post show and they do nothing to help. If anything, they fuel hate.”

And, with that the topic of bullying came up in the conversation. Someone said, “Was gonna say the girls get mauled on IG for things that happen on show, and you never see anything from ABC/bachelor, absolutely insane.” Dylan replied, “Ever. They had that whole spiel on hating bullying, then purposely edit things to warrant bullying. Sh*t is wild.” 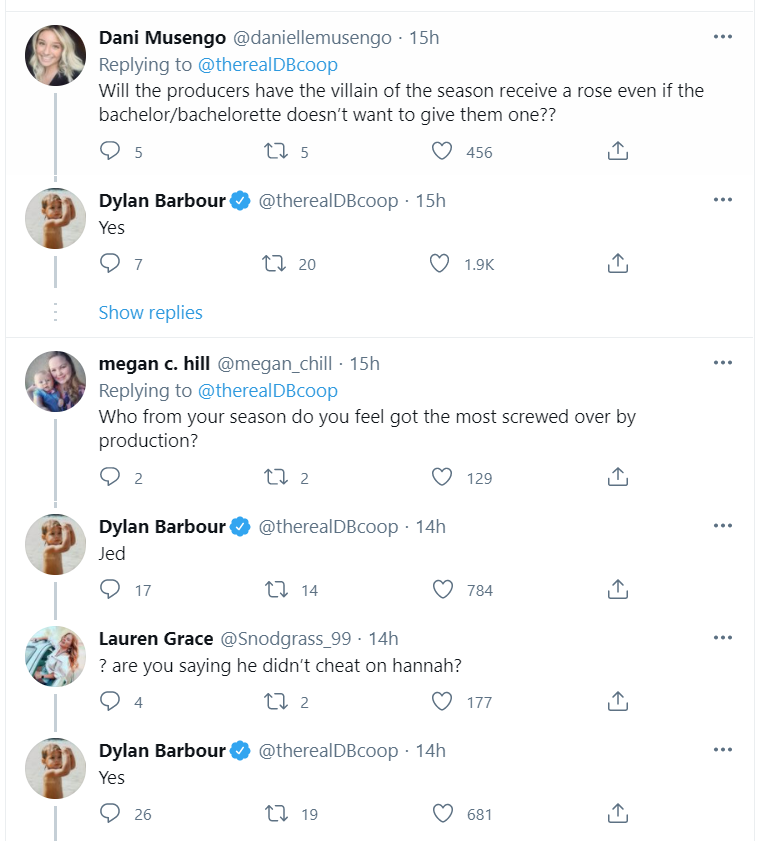 One fan asked how they remember names at rose ceremonies. He said the lead will come out and say three names then go back to look again and learn other names. He also said that yes it’s awkward when couples make out on camera. However, he said producers just turn the other way.

Most fans were nice and supportive, but one called Dylan out a little bit. They said, “No offense but didn’t you choose to go on the franchise twice and meet the “love of your life?” Dylan replied, “And I did. My experience is the .1% of everyone else’s. A majority of my treatment was pretty fantastic, but again I negotiated a lot of it.”

Dylan also confirmed if a couple leaves engaged they must stay engaged for two years or have to return the ring.

He also was asked about girls putting on their first night dresses weeks later if they didn’t get the right interview bites. Dylan said it’s true. He said it’s easier to tell if that happens with men because of facial hair.

Dylan also said surviving without tv’s and phones was amazing. Other people asked him about the food they get. Dylan said most of the time contestants prepare their own food in the house. However, on rose ceremony nights the food is catered. He also said it was actually pretty “solid” food.

Another fan asked about irregular sleep schedules and Dylan said that is true. He also said rose ceremony nights they were usually up until 2 to 4 in the morning.

Dylan said it’s fairly obvious who the lead is most attracted to, although the show does edit to make things seem different. However, he did say production can manipulate to get who they want to stay. For example, Victoria is probably still on the show because production wants her there for drama. Dylan and Hannah Godwin were lucky. They found love on the show and got engaged. They had to postpone their wedding due to the ongoing pandemic. In the meantime, they are enjoying each other and living life to the fullest. They recently bought a home and are settling in waiting for their big day.