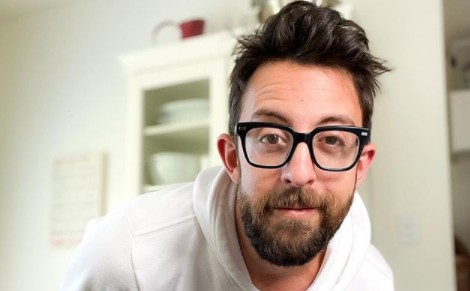 Adam Rose has a large following on TikTok and Instagram. In fact, he just hit three million on TikTok. His content is hilarious and he always wears a blue cardigan. Some of the things he’s done with the cardigan are go on Omegle and surprise people by asking them if they like cardigans before revealing himself. He also pretends to be his wife which is just him in a blond wig snarling.

Adam has appeared in several roles on television. He had a role in Merry Happy Whatever on Netflix. He had parts on The Santa Clarita Diet, Supernatural, Veronica Mars, and lots of other shows. His Instagram bio sums it up, “that guy from that thing you’ve seen.” He also has a YouTube channel where he interviews people like Jay Pharoah and Jessica Alba.

Why The Cardigan Is Such A Big Deal For Adam Rose

If you scroll the TikTok profile of Adam Rose, you won’t see him without his blue cardigan. It’s something he always wears. In a previous video a fan suggested he try a red cardigan. He did, but quickly switched back. It didn’t feel right.

When someone said the blue cardigan had to come off when he hit three million, he just laughed then said he’d do it. Shocked he reached three million, he knew a promise was a promise. He captioned it, “do I even exist without the cardigan?” He took it off, stood in his white t-shirt, and then used a special effect to explode.

The video got some thirsty comments, which he addressed. One said, “this man went from CUTE dad to HOT dad real fast.” Another said, “this man is chiseled, the cardigan lied to us.” On Instagram one fan said, “How many followers in TikTok/ Instagram for the beard to come off.” Adam responded, “too many.”

The Comedian And Actor Milked The No Cardigan Video

Adam Rose didn’t just stop with the first one. He responded to a fan’s comment that said, “you’re hitting different,” flexing with an applause track in the background.  Rose stitched himself removing the cardigan and said he appreciated all the comments while he covered his chest. He also did the trend with the red light and the silhouette as he took it off.

Fans love Adam and he recently went live to put together a desk. Over a thousand people watched him do that. The next milestone of five million, they want him to take his shirt off. He responded to that request too with a video showing himself immediately doing pushups. What do you know Adam Rose from? Did you enjoy seeing what was under the cardigan? Comment with your thoughts down below.

‘B&B’ Spoilers: Steffy And Brooke Battling Over Forrester Again?
Javi Marroquin Calls Cops On Lauren Comeau For Abuse, Guess Who Has His Back On This?
‘The Bold And The Beautiful’ Spoilers, July 19-23, 2021: Carter And Quinn Are All In
Audrey Roloff Flaunts Serious Skin & Baby Bump In Skimpy Bikini
At Six Months Pregnant, Audrey Roloff Masters New Skill With Jeremy’s Help