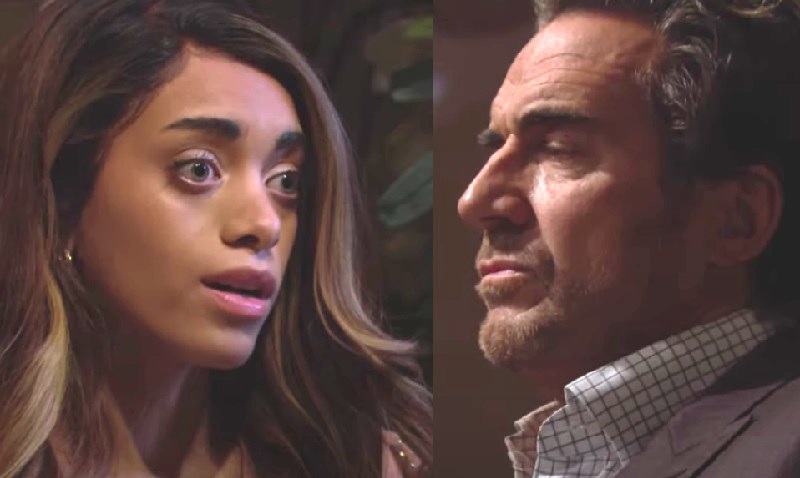 Bold and the Beautiful spoilers said Zoe and Zende would get caught by Ridge but the spoilers never suggested she embarrass herself first. It appears the B&B spoilers forgot to mention how this top Forrester Creations model would beg Zende to the point the audience is turning red.

Bold and the Beautiful  – Creating Hatred For Zoe Buckingham?

It looks like Zoe Buckingham’s (Kiara Barnes) pursuit of Zende Forrester (Delon De Metz) came to an abrupt halt. You can thank Ridge Forrester (Thorsten Kaye) for that one.

Bold and the Beautiful has a way of dragging things on way too long. But that is usually a storyline or plot. On Thursday’s B&B episode Zoe wouldn’t shut up or take no for an answer.

It looks like the writers might have gone a whinny sentence too far with Zoe. Fans are asking today if Bold and the Beautiful is deliberately attempting to get their fans to hate Zoe Buckingham.

Zoe is due to start her wedding planning with her fiance’ Carter Walton (Lawrence Saint-Victor). But just hours before she’s expected home to do this she is begging Zende to sleep with her. Zende is not only a gentleman but he seems wise beyond his years as he turns her down.

Several times the Bold and the Beautiful model states her case to Zende as to why they should spend the night together. Not only does her persistence a cause for embarrassment, but her reasoning for wanting to try Zende on for size is embarrassing as well.

This young man looks almost frightened as Zoe pushes. She tells him that she needs to spend the night with him to see if he’s the guy she’s meant to be with. If you didn’t know what she was talking about, you’d swear she was deciding between two pairs of shoes, not two men.

Luckily for Zende, Ridge arrived in time to hear a good deal of Zoe’s repetitious attempts to get Zende to switch on the romance. Ridge steps out of the darkness to say that he’s heard enough.

Bold and the Beautiful spoilers don’t see Zoe backing away for good. She will more than likely attempt this again. Ridge is her boss, so she’ll probably slither away with her tail between her legs for now. Still, Zoe is not one to give up easily.

While fans report they’re thankful Ridge put a stop to this, something else bugs the B&B veteran viewers. Ridge, who will exert some power in this incident as Zoe’s boss, seems to have a loss of memory. His generation of Forresters, along with the Logans and Spencers, wrote the book on betrayals.

However, he’s biting off the heads of this new generation for something his generation did with such ease. This includes Ridge himself.

It’s hard for the Bold and the Beautiful fans to take Ridge seriously. After all, if you look up the word “infidelity” in the dictionary, you might find him, his wife, or any other of their B&B relatives, like their adult kids. So Ridge holding court on Zoe and Zende might be a tough pill to swallow for fans.

Bold and the Beautiful spoilers suggest Zoe pushes Ridge into a corner. He’s not sure what to do about what he learned when walking in on Zende and Zoe. Although the spoilers hint to Zoe promising she’ll be true to Carter, Ridge doesn’t believe this. Eventually,  he’s on the edge on what to do about Zoe and Zende.