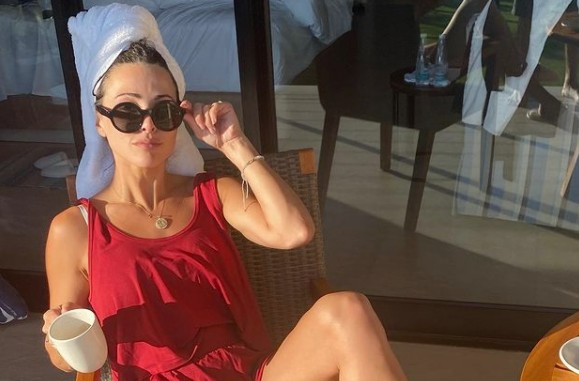 Andi Dorfman is reminiscing about her time as The Bachelorette. Fans know she gave her final rose to Josh Murray. However, their engagement ended rather toxically. Now, looking back, Andi says she would definitely do things differently if she could go back in time. So, who would she pick instead of Josh Murray?

Entertainment Tonight shared all about Andi’s thoughts on what she’d do differently on her season. It’s been seven years since her season of The Bachelorette aired. Now, looking back she’d change who she gave her final rose to. Recall that her winner was Josh Murray. Her runner-up was Nick Viall. He received a lot of heat after her season for talking about their intimacy on After the Final Rose. So, if given the a redo, Andi would not pick either of her final two men.

Andi said if she could do it all again she would give her final rose to Chris Soules. The Iowa Farmer actually finished third on Andi’s season. Andi said, “Honestly if I had to pick a different person from my season, it would not have been Nick [Viall], who was second. It would have been Chris Soules, who was third.”

Why didn’t she pick Chris at the time?

She went on to say, “At the time, [Chris] was my buddy, my friend. I really liked Nick and Josh, so I was like, I need to remove… Chris was like, my safety blanket. He was the guy I could go on a date with and knew that we could have a good time, there wasn’t a ton of pressure.” Andi continued, “He was a relief. I knew when the final three came down I needed to actually get serious about these final two, so I kinda had to remove him as a safety net. But it definitely wouldn’t have been Nick or anybody else, I don’t think.”

Chris moved on from Andi’s season to become the next Bachelor. He and Andi met up not long ago for dinner sparking rumors they could be rekindling things. Nothing ever came of it and to everyone’s knowledge Chris is still single. He briefly dated Victoria Fuller last year, but that ended when she said she wasn’t looking to move to Iowa anytime soon.

Things didn’t end well between Andi and Josh Murray. In fact, the two seem rather like enemies. When asked if she has been in touch with her ex fiancé, Andi said, “Hell no.” Andi went on to say, “I moved to New York and that was my parting gift. I don’t know [if he’s tried to reach out]. I’m pretty sure that number has been blocked for about five or six years.”

Andi also had some comments on Clare Crawley’s recent breakup with Dale Moss. She said she tries to stay out of everyone’s business and keep her opinions to herself. She also said she’s not surprised or surprised by their split. After all, she knows she also had a failed engagement from the show.

Do you think Andi and Chris should hook back up? Would they make a good couple even now?

Shirtless Garrick Merrifield Flaunts What He’s Got Amid The Hate
Pregnant Robyn Brown Popping Out Baby To Save ‘Sister Wives’?!
‘Dexter’ Revival: Release Date, Cast, What We Know So Far
Josh Duggar Prohibited By Court From Seeing His Sister Jessa’s New Baby
A New ‘Big Brother’ Baby Has Been Born! Who Gave Birth? [See First Pic]