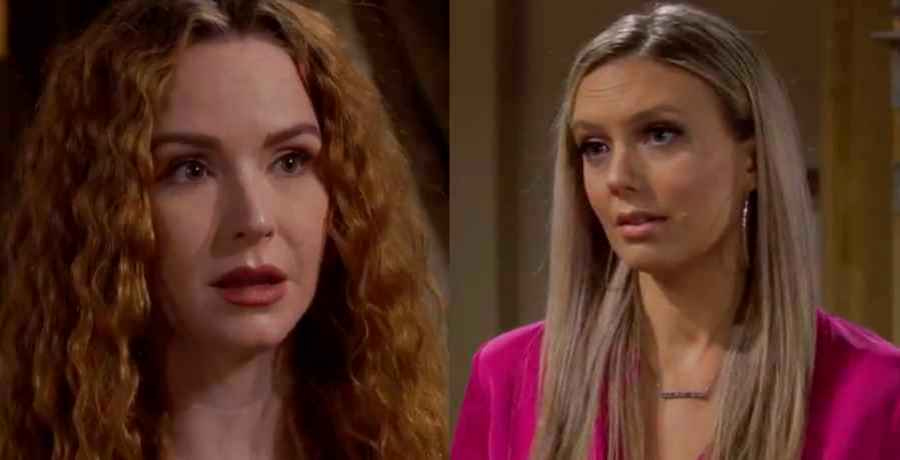 Spoilers for this week on The Young and the Restless promise plenty of drama. This will include a visit by Mariah to Chance and Abby at the Chancellor Mansion with a difficult question. A snow day at Victoria’s house ends up with lots of fun. Meanwhile, Summer and Kyle will return from Los Angeles.

The Young and the Restless spoilers and surrogacy

Spoilers for Wednesday, January 27, tease that Mariah Copeland will visit Abby Newman-Abbot-Chancellor and Chance Chancellor at the mansion. The talk will quickly turn to Abby’s news about not being able to carry a baby. Mariah is very sorry to hear this. She will listen as Abby gently introduces the idea of surrogacy. At first, Mariah is happy they are moving forward with baby plans. She even offers to help Abby and Chance find a surrogate.

At this time, Chance will leave the room and Abby will say she hopes their surrogate won’t be a stranger. Eventually, Mariah will catch on to the fact that Abby wants her to be the surrogate mother. This will shock her to the core and she will be left speechless. Mariah will quickly leave, saying she needs to talk with Tessa Porter.

Following her departure, Abby and Chance will wonder if they should start looking for someone else. However, Abby will believe Mariah just needs a little time. Whatever happens, Abby is keen to go ahead and is ready for the journey to happen.

Will Mariah do it?

Meanwhile, a still shocked Mariah will meet with Tessa and ask her if she can imagine her pregnant. Tessa will, of course, be shocked, until she learns about Abby and Chance’s request.

Looks like Mariah has a big decision to make! 👶 #YR is new this week on @CBS and @CBSAllAccess. Make sure to tune in! pic.twitter.com/wPCTzdmodQ

Meanwhile, Mariah will worry about something going wrong with the pregnancy. She will also worry about what nine months of pregnancy would be like. Meanwhile, Tessa will tell her to take her time, but she will note Mariah hasn’t yet said no to the request.

According to sources, it will be a snow day for the kids at Victoria Newman’s house. Billy will arrive and will be surprised that Victoria is there. She will explain to Billy that her Hawaii trip has been canceled due to bad weather. She will persuade Billy to stay and there will be many humorous moments as the kids bother their parents while they try to work from home.

It will end up being a great day for Victoria, Billy and the kids, with plenty of quality family time. In fact, will be almost like old times, until Billy receives a call from Lily Winters from New York. This will lead to Victoria overhearing Billy telling Lily that he misses her and she will be upset.

Meanwhile, in other The Young and the Restless spoilers, Summer Newman and Kyle Abbott will return from their trip to Los Angeles. They will recap what they have learned about Sally Spectra. This is the fact that Sally faked a terminal illness and kidnapped Flo Fulton to cover this up. While this is obviously bad, Kyle will remind Summer that her goal isn’t to ruin Sally’s life.

The winter drinks at The Grand Phoenix get a 10/10 from us! 🙌 #YR pic.twitter.com/dtZzXGXVYW

Meanwhile, at the Grand Phoenix, Phyllis Summers and Nick Newman are talking when they receive a text from Summer, saying she wants to meet. When she gets there, and after Nick leaves, Summer will tell Phyllis about the information she has got on Sally and that Jack Abbott is on Sally’s side. Phyllis won’t be happy about the idea of Summer working with Sally, while Summer asks her how she should use this newfound information. Phyllis will prompt Summer to keep the information to herself for now.

Sally fishes for information on The Young and the Restless

Later, Sally will be trying to work while Jack enters, noticing something is wrong. However, Sally won’t react and he will leave. Kyle will arrive on the scene and Sally will start fishing for information about what he and Summer found out in Los Angeles. Kyle will try to leave, while Sally will admit she has made some mistakes, but that she needs her job at Fenmore’s.

Spoilers say that when he leaves, Sally will receive a call that will send her running to track down Jack. At that stage, Sally will open up to say she made a mistake on a Fenmore’s shipment and had missed a deadline. Jack will offer to help her, making Sally grateful, but at that moment, Phyllis will arrive and spot them together. Phyllis will be introduced to Sally, saying she is Summer’s mother. However, when Sally goes to take a call, she will ask Jack what he is doing with Sally. He will then assume Summer has told her about her problems with Sally.

Later, Summer and Kyle will speak briefly about Sally and he will think Sally is right where Summer wants her. Summer will later talk to Jack about her eye-opening trip to Los Angeles. At that time, Sally will approach the office, hearing this exchange and looking concerned.

Keep up with The Young and the Restless weekdays on CBS.