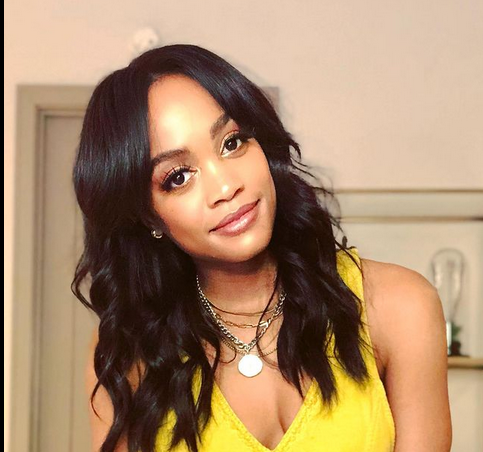 Rachel Lindsay returns on MTV Ghosted. MTV announces that Rachel Lindsay will reunite with her co-host, Travis Mills. They will be back for 5 episodes of MTV’s Ghosted: Love Gone Missing. These episodes will begin airing on Monday, February 8. The episodes are a socially-distanced Valentine’s special. So, Rachel and Travis help people to reconnect with friends and lovers who ghosted them. It’s a guarantee that some secrets will resurface during each episode.

In addition, MTV will have cult romance comedy movies running during this Valentine’s special. Tune in to enjoy movies like Just Friends, The Break-Up, Mr. & Mrs. Smith, and Adam Sandler’s classic, The Wedding Singer. MTV will also air a Catfish: The TV Series special showcasing the most heartbreaking episodes from the show. It will be quite the jam-packed Valentine’s special for fans.

Rachel is a legal professional who specializes in sports law and sports management. She told Refinery 29 that she felt she had hit a plateau and that it was time to make a change. Rachel is happy with this career move as it has opened new doors for her.

She points out that she is a big reality TV fan and along with her professional background, she feels ready to handle MTV’s Ghosted: Love Gone Missing.

She says, “Obviously my legal background helps with the investigating part, and having to interrogate and sift through certain facts and put pieces together… having to try to get people to open up and trust you is what Travis and I are having to do on Ghosted. So we have to use our backgrounds and skills to put that together to help people get those answers that they need.“

Rachel has her own “ghosted” story that dates back over 10 years ago. She was in a long-distance relationship with a guy who she felt was the one. She, unfortunately, found out through a concerned friend that this man had a wife and child at that time. Rachel still chooses to date him but then one day, he changes his number and completely ghosts her. And she cannot trace him afterward.

She bumps into him a couple of years later and tries to get answers. The man tells her that the only way he knew how to break it off was to cut her off completely. “When it happened to me, I didn’t know anyone with a similar crazy story. And now it’s so common that it’s becoming acceptable, and I don’t think it should be. You learn that when you watch this series, because you see how it affects the person that was ghosted.” said Rachel. When asked if her husband Bryan has ever been ghosted, she said that his situations were not too serious.