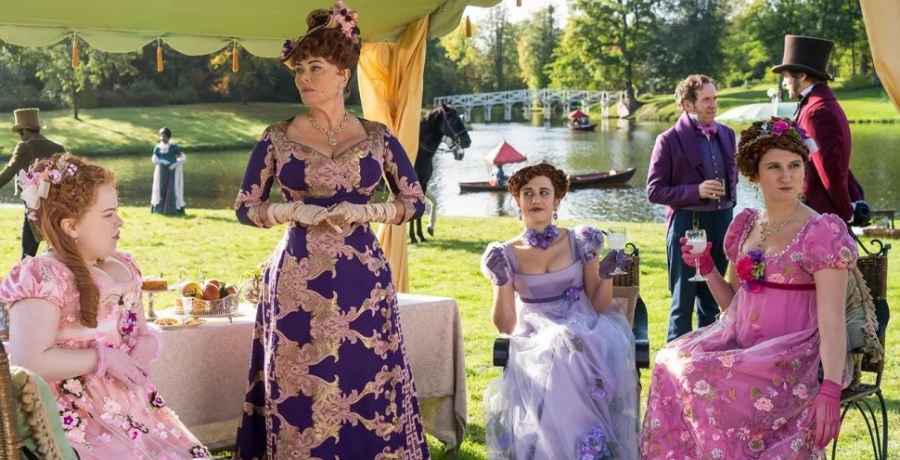 There is no doubt the new Netflix series, Bridgerton is a huge hit with viewers. However, some eagle-eyed fans have noted a few production errors in the period drama, set in Regency-era England. One glaring error was a yellow line on a road, which many fans spotted. However, there were plenty more along the way.

The Netflix drama series Bridgerton is set in Regency-era England. However, it was, of course, filmed in the twenty-first century. Production is supposed to watch out for potential continuity errors while filming the episodes. It turns out they missed some.

At the beginning of the premiere episode, there is a scene, showing the town square. A number of people are riding in horse-drawn buggies. The problem here is that in one scene, a yellow traffic line is clearly seen on the road. Have a look at the tweet below.

Really enjoying Bridgerton, but with the technology available to film makers these days, a yellow line? pic.twitter.com/Ah4rljsfKn

One Twitter user apparently lives in the area and a friend had recommended they watch Bridgerton.  They wrote that they “finally had a watch. Very enjoyable, especially recognising [sic] Wilton House. It was interesting to see that Bath Crescent had yellow line parking restriction even then.” Others pointed out that telecom manholes were also spotted in the streets.

@tds153 after you mentioned Bridgerton the other week I finally had a watch. Very enjoyable, especially recognising Wilton House. It was interesting to see that Bath Crescent had yellow line parking restriction even then.

Other errors on the Netflix show

But that’s not all. Once you start pointing out continuity errors, naturally, people come up with more. Another viewer noted he had spotted advertising posters for the retail chain, Primark, in the windows in some of the scenes. That retail clothing chain only opened in 1969.

the primark poster in question pic.twitter.com/H6EZRdramn

Other eagle-eyed viewers noted seedless grapes and filtered cigarettes on the period drama. Oh, and they also noted a few “no parking” signs!

I was requested to watch Bridgerton during a lockdown evening, turned into a ‘spot the gaffe’ game. 1813 London society, yellow lines, no parking signs, smoking filtered cigarettes, bemused.

Bridgerton is doing fine, despite everything

Many viewers commented, telling people to stop looking for mistakes and rather take in the show. One even commented that tweets sent by nobodies make it to the mainstream media these days!

Based on the first in a series of romance novels by Julia Quinn, Bridgerton is doing well, despite everything. The costumes, architecture and more attracted people of all ages. In fact, it had one of the biggest debuts ever on the streaming platform. This was the first project to come from Shonda Rhimes’ deal with Netflix. It turned out 63 million households viewed the show within the first 28 days. According to CNN, Bridgerton is the fifth-largest original series launch in the history of Netflix.

In fact, it is so successful, Netflix last week renewed the series for a second season. Reportedly, this time, the storyline will focus on Lord Anthony Bridgerton (Jonathan Bailey). Bailey said he is “really hopeful” for his character’s future during Season 2, as he didn’t smile much in Season 1.

Production on Season 2 of Bridgerton is set to start this spring. We can only hope producers keep an eye out for any potential problems this time. In the meantime, readers who haven’t seen the show can binge Season 1 on Netflix right now.