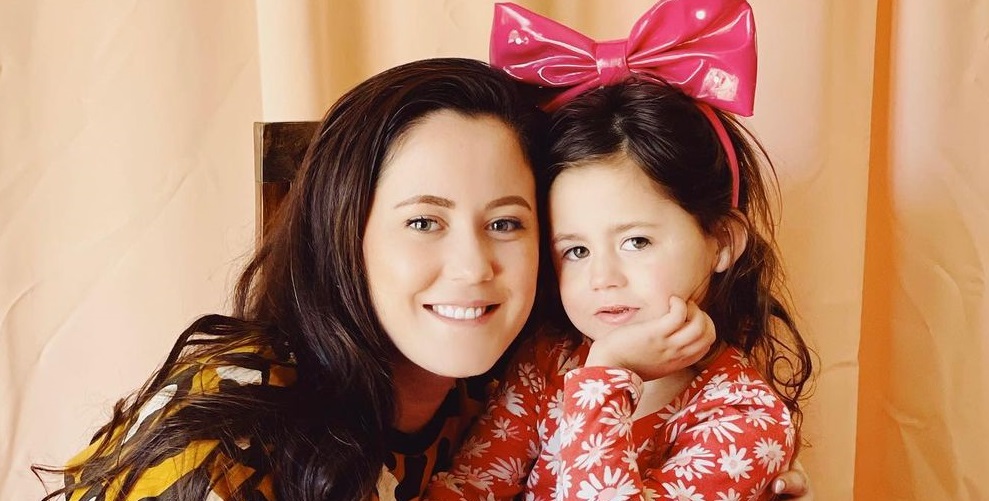 Jenelle Evans got feisty on TikTok after accusations of racism started to fly. The former Teen Mom 2 star recently celebrate her daughter Ensley’s fourth birthday. And, she documented it on TikTok. Unfortunately, one troll decided to tear into what was intended to be a special video about her daughter. What exactly did the troll say? And, how did Jenelle Evans respond? Keep reading for the details.

Jenelle Evans explains she decided to purchase a blow-up bouncy house from Walmart. She explains this allowed her to have a small party at home with a few people. And, she knew the bouncy house was safe and COVID-19 free.

She also purchased her birthday party decorations from Walmart. And, did the best decorating she could do. She showed off a few different LOL Doll decorations. Jenelle also picked up an LOL Doll headband  with a giant pink bow on top. She explained it was supposed to make the child wearing it look and feel like an LOL Doll. Jenelle also snagged some LOL Doll party favors as well.

Then, she showed a short clip of her daughter Ensley enjoying her bounce house a little before her friends come over. After her friends arrived, they bounced for a while. Then, they enjoyed pizza followed by cake and ice cream.

Unfortunately, one TikTok troll felt the need to get negative in the comment. They called out the “lack of diversity” in the guests at the party. Jenelle, however, wasn’t having it. She fired back at the comment.

The former MTV personality fires back with confidence

A day later, Jenelle Evans fired back at the TikTok troll. She declared she was taking everyone in her daughter’s bedroom to look at the recent toys she has played with. After showing off the messy room, Jenelle showed a baby of color in the toy stroller.

She explained this was her daughter’s favorite toy. Moreover, racism didn’t have a place in her household.

In the comments of the TikTok video, Teen Mom 2 fans admit the accusation is confusing. They suspect the person who made the comment had never watched the MTV show. And, knew nothing about Jenelle Evans’ dating history. She’s never had an issue with being with men of other color.

What do you think about the racism accusation?