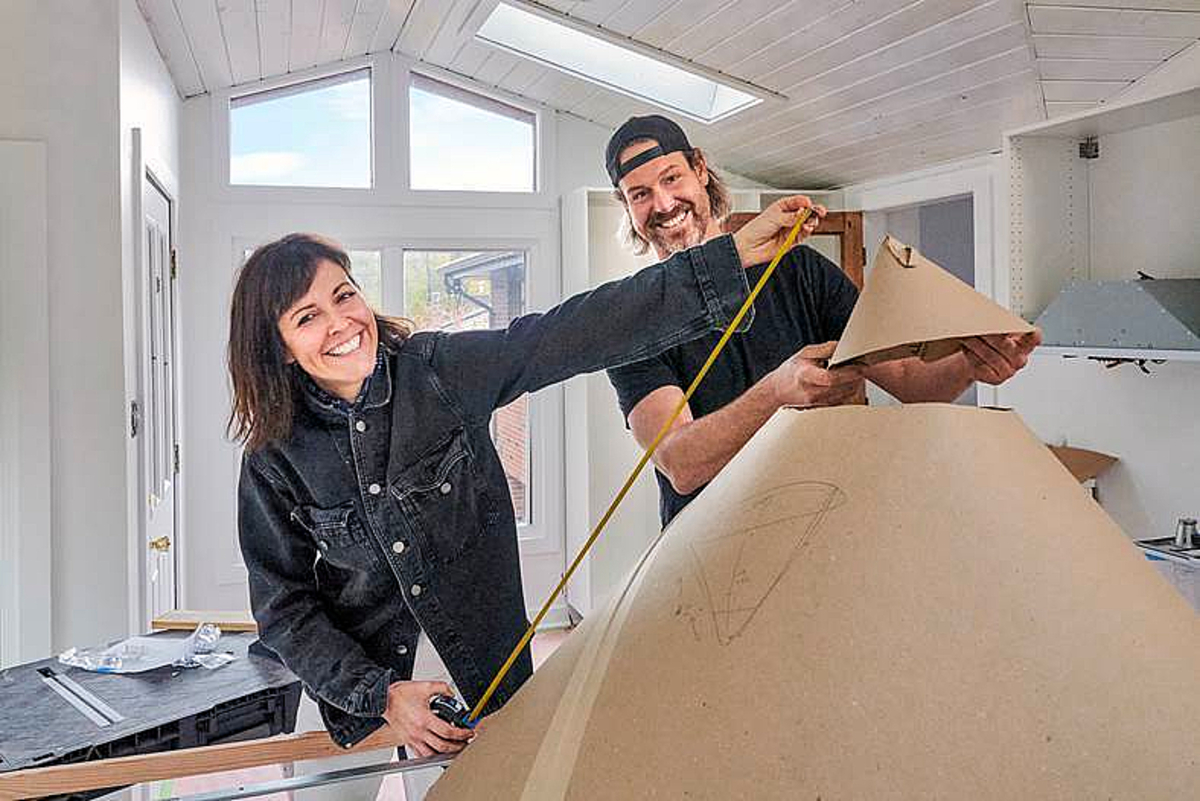 On the premiere episode of HGTV’s Home Again With The Fords, Leanne and Steve Ford have a problematic demo that turns out to have an amazing discovery. They come across an unusual find in the house they are working on, just by chance.

TV Shows Ace exclusive clip reveals that sometimes when you are knee deep in a demo, the opportunity for lucky finds from decades previous can add a lot of interest to the new renovations for the house. You might even be able to incorporate the vintage find into the redesign.

In Leanne and Steve Ford’s case, it is the discovery of old newspapers used to insulate and pad the floors under 1950’s wall-to-wall carpeting that becomes their eureka moment.

Thinking out loud, Leanne wonders if they can decoupage the interesting “time capsule” of old print to a piece of furniture, flooring or a wall.

About the new episode of Home Again With The Fords

Pittsburgh is where the show is based as the Ford siblings take on new renovations.

Kristi, Sam and their three boys moved from Denver to Carnegie, a small township on the outskirts of Pittsburgh, to take over an inherited old farmhouse that’s been in the family for generations, complete with a mini-golf course and ice cream stand on the property.

Now, Kristi’s parents are coming back and moving into the old farmhouse to live out their retirement years.

Before they arrive, Kristi and Sam enlist sibling duo Steve and Leanne Ford to update the home with fun and fresh touches while keeping the rich family history intact.

The wow factor is always worth the wait as the duo take us from demo say to reveal moments that make people cry.

Pittsburgh natives Leanne and Steve Ford will help families returning to their “Steel City” roots get fresh, modern home renovations in the new HGTV series, Home Again with the Fords.

Premiering next Tuesday, the seven-episode series will follow interior designer Leanne, and her brother Steve, a licensed contractor, as they update old homes for clients who love the duo’s imaginative style.

The siblings previously starred in the HGTV hit series Restored by the Fords, and now will again showcase their limitless creativity in every home renovation.

From adding customized steel details that honor a family’s history in the local industry to restoring special items from childhood homes, the Fords will delight homeowners with every meaningful design twist.

“People all over the country are now returning to the places they grew up. And what a wonderful place to be. It truly is a privilege to help people come home again, and to create a space they love,” said Leanne in describing the new concept in a press release.

“It’s great to work with my sister, Leanne, and she pushes the limits of design. It makes my job challenging, but it’s worth it in the end,” added Steve.

Throughout the series, the two siblings will address their clients’ desired home updates, while respecting and preserving the properties’ original charm.

In the series premiere which TV Shows Ace has the exclusive preview of below, the Fords will modernize a farmhouse owned by the family since 1880. The whimsical property boasts a mini-golf course and ice cream shop that Steve and Leanne frequented as kids, as well as a barn full of treasures Leanne can’t wait to revive.

Fans are invited to stay connected with Steve, Leanne and Home Again with the Fords at HGTV.com. Fans also can follow @HGTV on Facebook, Twitter and Instagram using #HomeAgainWithTheFords for additional show content and updates, as well as follow Steve @stevefordsgarage and Leanne @LeanneFordInteriors on Instagram. The new episodes of Home Again with the Fords will be available on HGTV GO the same day as it premieres: every Tuesday beginning Feb. 2.

Jeremy Vuolo Brags About Jinger Duggar’s Latest Achievement!
Carly Waddell Rushed To Hospital, Evan Bass By Her Side, What’s Going On?
‘Fat Amy’ Is Out, Amy Halterman Identifies As Skinny Now: See Photos
‘You, Me & My Ex’ Coming To TLC: Here’s What We Know So Far
‘LPBW’ Jackson Roloff Has Huge Accomplishment, Can’t Wait Until He’s 11