90 Day Fiancé star Deavan Clegg has been the subject of several plastic surgery rumors. In most of her Instagram pictures, she seems unrecognizable from the Deavan we came to know in the reality show. We first met the model when she fell in love with Jihoon from South Korea. They have one child together.

The mother of two is often seen with Topher, who she refers to as Taeyang and Drusilla’s father. Last week, she posted a video of Taeyang and Topher together and tagged it, #Familytime #dadandson. Then she disabled the comments so no one could comment.

Shady actions like this are why many 90 Day Fiancé fans keep attacking her. @90dayfiancenow reposted a photo of her holding the coffee cup inside a car on their page. Fans answered under it saying, “She looks like a stereotypical cartoon version of a Korean woman” Another pointed out,” She looks nothing like herself. Wow, she needs to stop with the procedures and love herself. She was beautiful before all this work.”

Deavan responds to fans over new look on her Instagram and posted a short video. In the video, she showed two photos of herself edited and unedited. She laughed, saying,” When you first meet your girl after six months.”

Deavan captioned the happy video. “When you can laugh at yourself lol. I always find it humorous when people compare women with or without makeup or professional photos to non-edits. It’s humorous.” The model feared that trolls would fill her comment section, but there were some loyal supporters. “You look great both ways, and who doesn’t edit their photos nowadays? People will always find something to pick on when they don’t like you.” 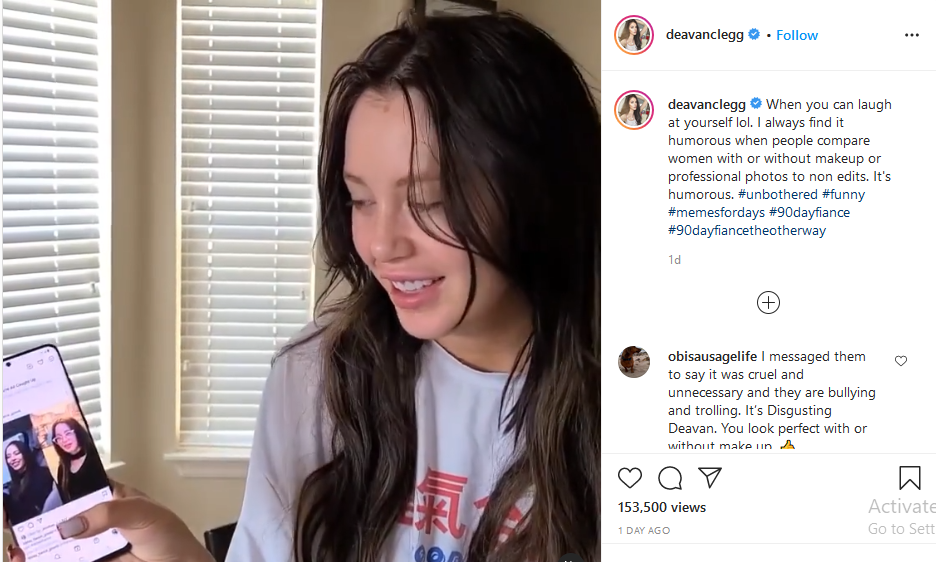 Viewers found their way to a Reddit thread r/90dayfiance to give their two cents about the video. Most did not have nice things to say. “If she truly didn’t care, then she would also post-normal (real) photos of herself and stop blaming TLC for her real look on the show.”  Another commented on her appearance. “The comments on her original post were ROASTING her for how terribly faceapped her photo was.” Obviously, the comments did affect her. “Omg. I didn’t even recognize her. Those lips are seriously too much. Sad”

According to ScreenRant, Jihoon is still trying to do all he can to see his son. He hired the most capable lawyer in Utah to represent him. Last week, he went to a night out with his friends, during his time off, and had some wine. The father of one is also rumored to have gotten his nose done before starting the Gofundme. “Well now you all know where all the go fund me money went! Plastic surgery”

What do you think about Deavan’s new look? Let us know in the comment section below. Make sure to come back to TV Shows Ace for more news about your favorite TLC stars.