Danielle Busby recently told her Instagram followers “the shop was closed” in regards to having more children. That being said, Danielle Busby conceiving and carrying a child isn’t the only way to expand their family. They could also adopt a child if their hearts desired. OutDaughtered fans know there has always been some part of Adam and Danielle that have longed for a son. After all, chances are good Adam would love there to be another male in the house.

Adoption: Is Adam and Danielle Busby open to having more children?

The OutDaughtered mother recently engaged in a Q&A session on Instagram. Fans of the TLC family remain obsessed with the idea of having more children. But, we know Danielle Busby can’t actually conceive and carry another child. So, her and Adam would have to use other methods to have more children. The question is: do they even want to? After all, they already have a pretty large family.

According to an update on her Instagram Stories, Danielle Busby is open to more children. She, however, doesn’t feel that it is something her family needs right now. Both her hands and heart are full at the moment.

“My heart and hands are full with these six little loves, but if God placed adoption on our hearts, this is something Adam and I have always said we would be open to,” she explains. 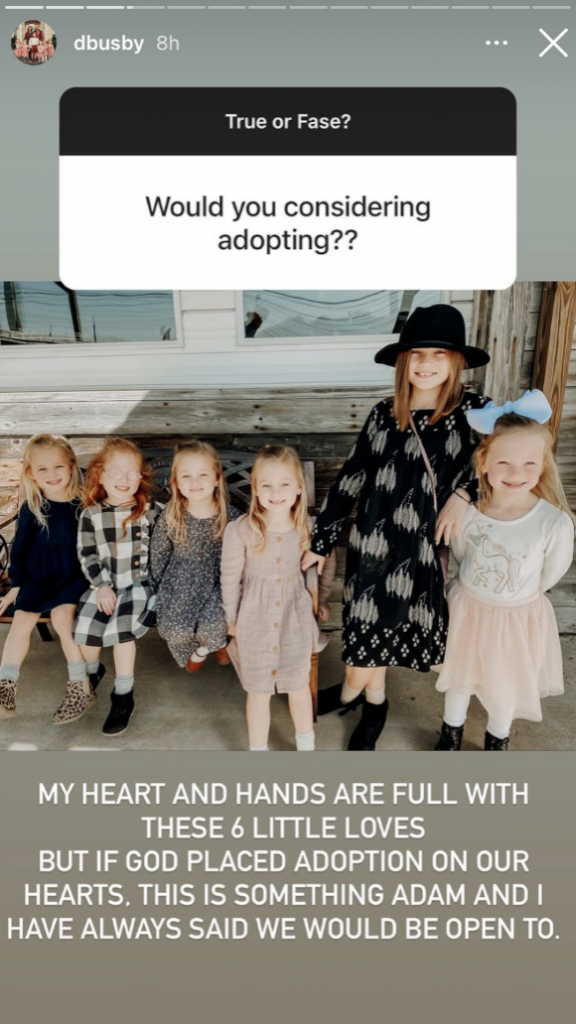 So, it sounds like Danielle Busby and Adam are open to more children. But, they are also happy with their current situation. If God compels them to have additional children… They’ll embrace adoption with open hearts and minds.

Fans have wondered for a while when OutDaughtered would return for Season 8. Fortunately, news recently broke confirming the premiere date. As we previously reported, Season 8 of OutDaughtered will premiere on Tuesday, February 23rd at 8 p.m. ET/PT. We know Season 8 will see the quints start kindergarten together. We also know we’ll finally learn more about the health condition that plagues Danielle.

Was The Reason For Danielle Busby’s Vague Health Updates Revealed?

Fans know Danielle has been extremely elusive and vague about the details of her health. In fact, her vague updates have greatly upset her fans But, we recently learned this vagueness was likely because of a contract with TLC

Will you tune in to new episodes of OutDaughtered? Do you think they will adopt more children one day? Possibly a little boy? Share your thoughts with us in the comments.

‘DWTS’ Pro Gleb Savchenko Has Some Exciting News — What Is It?
Chrishell Stause Vacations In Paradise With Her New Man — Who Is It?
Kourtney Kardashian STUNS While Rocking Glow-In-The-Dark Bikini
Lifetime’s Thriller ‘Murder On Maple Drive’ Is About ‘Murder House’
‘Scandalous!’ Danielle Busby Teases Blayke & Parker: See Video