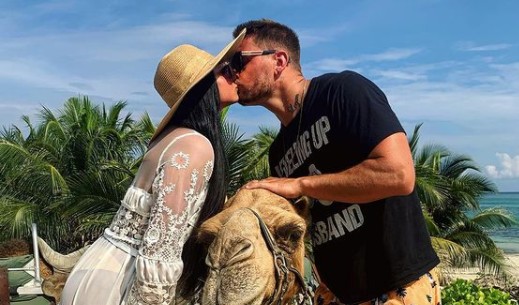 On a new Unpolished wedding planning is in full swing. A clip shows Bria Martone, Matthew Mancuso, Jen Martone, and a couple others meeting with different people at her venue. Matt is wearing white ripped jeans and an orange Hawaiian print shirt. The date they were planning was Saturday September 12th.

In the preview when they are talking to the man making the cake they are getting very excited about crystals and satin ribbon. Jen Martone says, “they’re going to make a carriage out of the cake.” Jen is concerned because she needs the answer of how many people can come. They have a guest list of three hundred. This is during the pandemic so everyone is wearing masks as they are looking at the venue.

In a separate clip Bria Martone is standing next to her mom when the place she wanted to have her shower calls. They tell her because of COVID they don’t think they can host the party. Jen says things are changing everyday and it’s hard to give Bria the wedding she wants. She says Bria has to prepare herself for more disappointment. The venue they want is a castle, so they thought there would be room for all their guests.

The banquet manager tells them they’re the first couple they’ve seen since the pandemic started. It’s all very new to her. She tells them they can only have fifty guests. Jen asked if that was the case with such a large venue.

Jen tells cameras that won’t work because sixty-eight people are immediate family. She asks if they can do it outside and the woman tells her no, only fifty on the property. Jen asks where all the brides are and the banquet manager says cancelled or postponed until the next year. The woman then tells her there’s no dancing. This takes even Matt by surprise who so far had been nodding along in understanding. Bria says, “it’s none of our faults.”

Bria tells the cameras they were all getting frustrated and didn’t know how to react. She said, “whether we want to scream, cry or whatever there’s nothing anyone can do.” There wasn’t anything they could do about it because those were the rules. She said, “things are just crumbling everyday.”

It Leads To Fighting With Matt

When they stand up Matt asks Bria Martone what about the rehearsal dinner. She snaps at him she doesn’t know what to do about the wedding don’t ask me about the dinner. He asks why she’s yelling at him while she’s trying to walk away. Bria is fed up and yells that she, “doesn’t want to hear it right now.”

TLC captioned the preview, “Shocking Wedding Restrictions.” One follower said, “TLC I think you mean necessary, or safety protocols or responsible. Words matter.” It looks like Bria is in for more disappointment on tonight’s Unpolished. What do you think about the castle not being able to accommodate more people. Comment with your thoughts below.