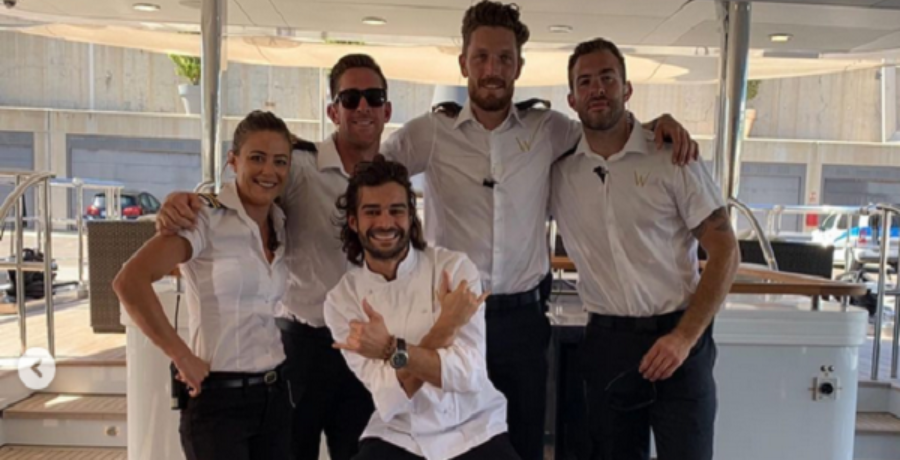 Below Deck Med star Alex Radcliffe shared some behind-the-scenes photos from Season 5. As fans remember, it was a dramatic season. The show made history by having three women in charge of the superyacht. However, those good feelings didn’t last because of Captain Sandy Yawn and Bosun Malia White.

Fans wanted both women off of the show. They were slammed for the way they treated Chief Stewardess Hannah Ferrier. Captain Sandy fired Hannah after finding out she had unregistered Valium and a CBD pen on board. Malia was the one who snitched on Hannah.

Not only was Hannah fired, but so was Chef Hindrigo “Kiko” Lorran. Meanwhile, there was drama between stew Jessica More and deckhand Rob Westergaard. And then, Chef Tom Checketts raised eyebrows for his behavior in the galley. Now, Alex is revealing whether the crew is on good terms.

On Monday, January 25, the Below Deck Med Season 5 star posted a series of photos on Instagram. The deckhand was feeling sentimental. Alex posted photos of the crew during good times. Most of the photos included both the original cast members and the ones who joined the latter part of the season. In the caption, Alex hinted that the crew “hates each other” these days.

“Everyone mostly prob hates each other but I weirdly miss everyone [sic] of them in some type of way, or I just miss the partying aspect of charter and free drinks idk,” Alex wrote in the caption.

He managed to escape the drama. Alex was the type of guy who was friends with everyone. He didn’t even join in on the arguments during the reunion. Instead, he ate popcorn and drank while everyone else fought.

Below Deck Med fans sad to hear the news

Some of his fellow Below Deck crew members responded to his post. They wanted to let everyone know that they’re on good terms with him. “Love this!!” Chef Tom Checketts commented. Alex responded, “fix your account before I fix you knuckle [sandwich],” he joked. For some reason, he couldn’t tag Tom in the photos.

“Hahaha love you my boooy and miss you too!!” Aesha Scott wrote. “I look like a greasy troll in that photo.” Jessica More, who is a longtime friend of Alex, added, “Awwwww! Always miss you f***er!” Chef Kiko simply wrote, “[You] are the best.”

Some Below Deck Med fans are not surprised about the fallout. It was clear that the crew did not get along. Meanwhile, others are disappointed to hear about this update. “Aww I’m sorry everyone hates each other these are cute though,” one fan wrote. “We would never have known all the drama! You guys hid the hatred and kept it professional.”

Alex managed to avoid the fallout during Season 5. Jessica and Rob ended their boatmance shortly after leaving the yacht. Even Tom and Malia’s relationship ended. As for Hannah, she moved on after her firing. She made it clear that she doesn’t want to return to yachting.

What do you think? Are you surprised most of the crew doesn’t get along? Sound off below in the comments.