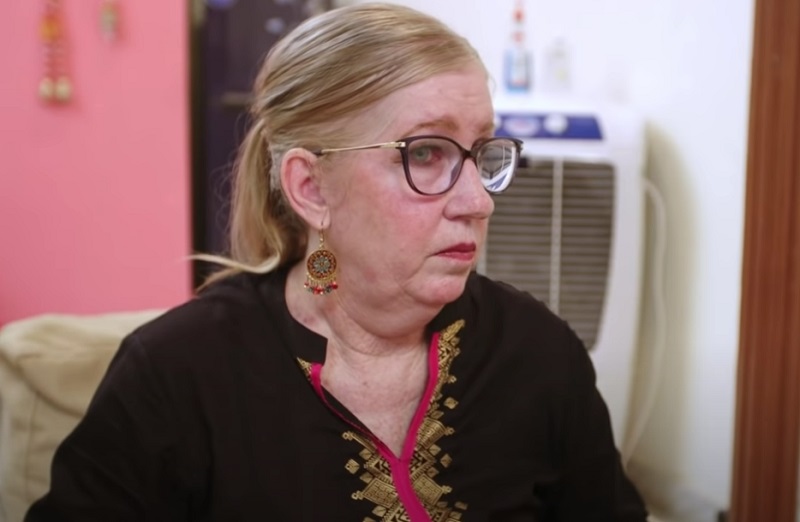 90 Day Fiance spinoff show, 90 Day Bares All caught a hurt Jenny storming out on Sumit after he agreed with his parents that she looked old. It seems that the show lived up to its title Sunday night when Sumit bared all about Jenny.

Jenny and Sumit are in love but the age difference became a roadblock early on for both Sumit and his parents. Jenny is 61 and Sumit is 32 and you can see the difference in their ages by just looking at them. But that never bothered the 90 Day Fiance American woman, Jenny.

She thought it didn’t bother her 90 Day Fiance guy either but apparently, it does. Sumit was caught between two worlds on Sunday night’s show. His devotion to his parents in one world and his devotion to Jenny in the other.

Sumit’s mother and father who never wanted him to end up with Jenny, fought hard for Sumit to break it off with her. His mom was so distraught over her son’s choice of an older woman that she threatened suicide if Sumit married Jenny.

At the time it looked as if Sumit wasn’t going to take any chances. He popped out the “promise ring” instead of an engagement ring to Jenny. Maybe he thought he was keeping his mom alive by doing this.

Sumit Goes Along For The Ride

Shaun Robinson interviewed Sumit and Jenny along with his parents virtually on 90 Days Bares All. Jenny seemed embarrassed and hurt over what she heard from Sumit. But he felt caught in the crossfire between Jenny and his parents.

His father shared that Sumit was stunned by how old Jenny looked when he first met her. Jenny asked Sumit if that was true. Sumit said on this 90 Day Fiance spinoff, that he would never tell Jenny that because it is hurtful. But because of his father, he had no choice.

He couldn’t lie and say no because he was shocked by how old she looked during their first meeting. The father said that Jenny is a good person, as is his son. But they expected a pretty wife for their son.

“I want to say something. She is very good. I agree. My son is also very good. We also expect the wife of Sumit should be good looking,” Anil said. “… Sumit was also shocked to see Jenny. The age of Jenny. Sumit, when he saw her first time, he was shocked.”

Jenny got up and walked right off the 90 Day Fiance set. She was hurt and she refused to sit there and take the insults. Sumit said this was not a conversation he would have with Jenny but it was his father who brought it up. When Jenny asked if he had really said that, he told her the truth… yes, he had.

Later Sumit and Jenny talked it over. He said that she didn’t expect him to say that to her on his own. It wouldn’t be nice. He did tell Jenny that yes, her older looks shocked when first meeting her. But he wouldn’t tell her that when first thinking this because he didn’t want to hurt his 90 Day Fiance partner.

It seemed to shock Jenny that Sumit held onto this thought without any mention to her. But he continued to say it is a hurtful thing to say. So she couldn’t expect him to say it. It was his dad’s fault. He couldn’t lie once his father spilled the beans.