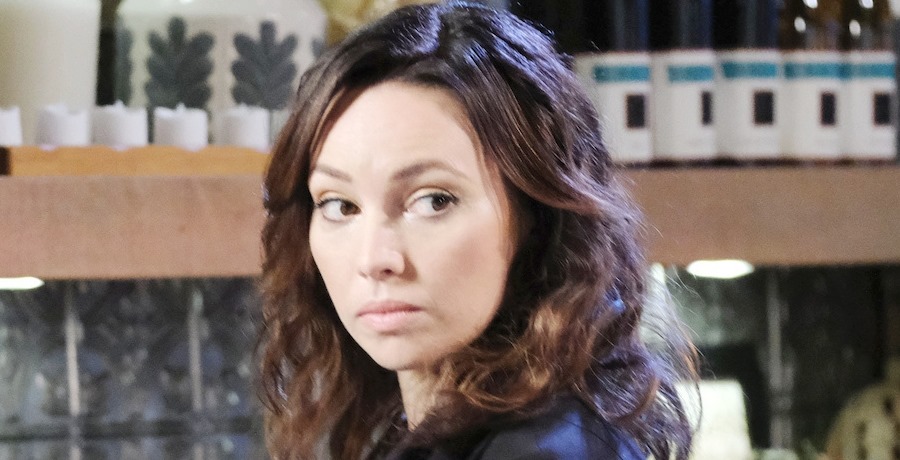 Gwen tearfully told her story to Jack and his wife Jennifer Horton (Cady McClain). She claims Jack, in fact, knew of her existence. She further claims his secretary sent “meager” monthly payments until her mother’s death. However, Jack still seems like a deer in headlights as he learned that news. So, if Jack didn’t’ send the hush money to Tiffany Rizczech, then who did on the NBC soap?

Gwen Rizczech’s sad tale of her mother’s experience with Jack Deveraux leaves him stunned recall Days of Our Lives spoilers. Jack genuinely doesn’t recall ever sleeping with a cocktail waitress in Chicago decades ago. However, he’s not sure, so he understands he very well might be Gwen’s father.

Gwen tells Jack he never wanted to meet her as a child, even after her mother told him about her. Jack claims that he never knew. Additionally, he says if he did know about her, he’d ever turn his back on one of his kids. However, Gwen says he knew, and she has proof, according to Days of Our Lives spoilers.

It turns out Tiffany Rizczech received monthly payments from Jack’s secretary, according to Gwen’s version of the facts. These payments stopped the day Tiffany died, leaving Gwen to become a ward of the state in London. Jack said he didn’t send those payments. Of course, Gwen doesn’t believe him. These two did agree on a paternity test to validate Gwen’s claim, and that said test needs to be done outside of Salem.

I can't tell. Is this the "Unbelievable Look" from Jack & Jennifer after receiving the news Gwen is Jack's daughter OR they just stepped in and smelled Poop? pic.twitter.com/IBqHY7uLwd

DOOL Spoilers: If Jack Didn’t Send The Money, Who Did?

Days of Our Lives spoilers say Gwen is adamant Jack sent the less than generous monthly support payments to her mother via his secretary. If this was the case, Jack was completely in the dark. So it’s likely the man Tiffany met with was not Jack Deveraux but his adopted father, Harper Deveraux (Joseph Campanella). Harper was a cold-hearted businessman turned politician. No doubt he had the ways and means to make the Tiffany/Gwen problem disappear.

However, other Days of Our Lives spoilers suggest Harper and Jack were both kept oblivious to Gwen’s existence. Another person close to Jack’s family took the initiative to keep this child away from Jack and the other members of Jack’s family.

"I've never heard that name in my life…she never told me" Oh Jack 😯
Harper did poison Kayla and frame Melissa, sooo it could be true ol' Tiffany got the Harper treatment #daddyJack #jnj #gwendeveraux 🤔 pic.twitter.com/EtvyLKc6Tz

Days of Our Lives comings and goings confirm Laura Horton (Jaime Lyn Bauer) returns to Salem early next month. Although she is one of Abigal Deveraux’s (Marci Miller) psychiatrists, she is not in town for a session or two with her granddaughter. Rather it seems Dr. Laura Horton has a few skeletons in her closet. In fact, her latest revelation will nearly destroy her family.

Days of our Lives spoilers tease Laura was the one who paid off Tiffany Rizczech all those years ago. Laura was fully aware of who Gwen was and that, indeed, she is Jack’s daughter.