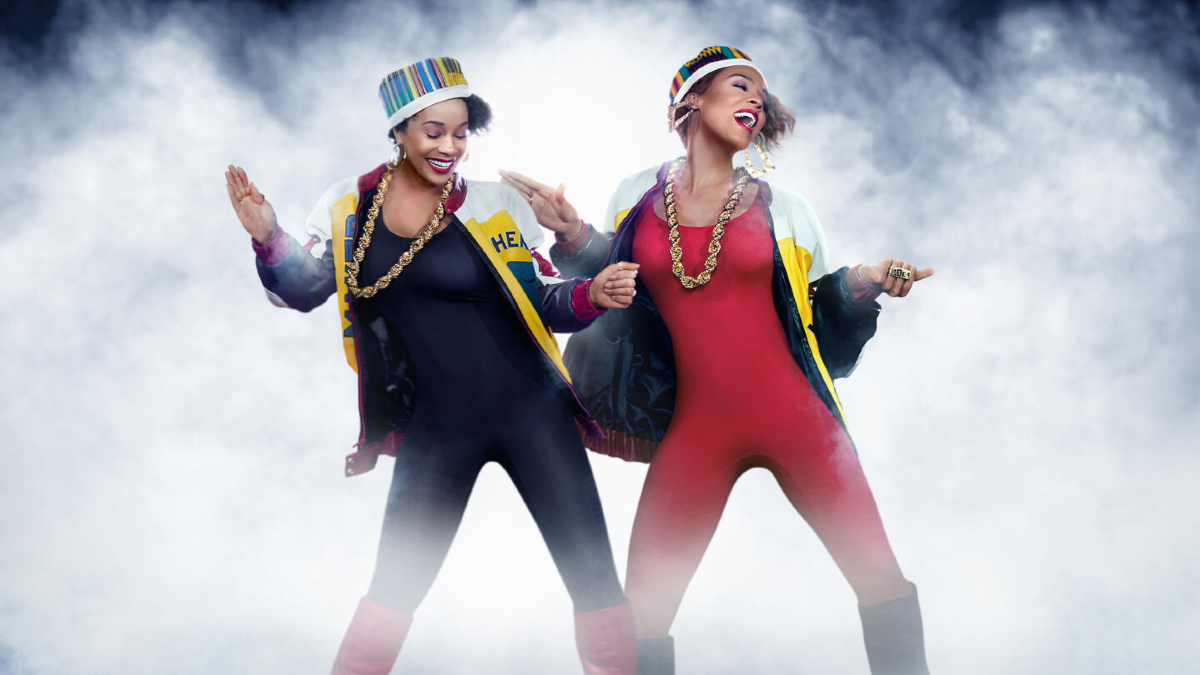 The scoop for tonight’s Saturday night shoop is the Lifetime original movie, Salt-N-Pepa, a true rags-to-riches American story that is as much about the strength of female friendships as it is about making it in the music business with every star aligning. Salt-N-Pepa was the hip hop group that included Cheryl “Salt” James portrayed by GG Townson, Laila Odom cast as Sandra “Pepa” Denton and Monique Paul Deidra cast as “DJ Spinderella” Roper.

Salt-N-Pepa rolls us back in time to 1985 in Queensborough Community College where two students, Church going Cheryl “Salt” James and first-gen Jamaican Sandra “Pepa” Denton crossed paths and wound up working together at a Sears call center.  The call center in Queens employed not only these soon-to-be global superstars but the rap duo Kid ‘n Play and comic Martin Lawrence.

At that time the east coast – west coast male dominated world of rap and hip hop as a total boys club.  Salt’s boyfriend, up-and-comer Hurby Azor had a genius idea to play the status quo, as women were usually just the eye candy in videos. He wanted the women to take on the men in rapping.

A game plan was hatched. Spinderella Deidra was the second DJ that Hurby found who rounded out the duo. Decades later, Spin went after the two women over royalties and money issues.

Who knew Sears was a talent incubator?

The two women worked with future hip-hop megastars Kid ‘n Play who Salt warned Pepa at the onset of her first shift that Kid was a sweetheart, but Play was “a dog.” They also shared a workspace with aspiring comedian and actor Martin Lawrence. Their friendships  fostered big dreams that manifested as each one helped the other with regards to their live gigs.

Sandy and Cheryl were shown making a promise to Martin Lawrence, saying at one point in the movie: “Whoever gets put on first will put the other on.”

True to their word, Salt-N-Pepa hired Lawrence to open for them at the Manhattan club, Inferno.

The trouble with Hurby

Hurby Azor (Cleveland Berto) had a huge part in the creation of their group, but as time progressed, his role was diminished as the two women found their own voice, wrote their own lyrics and took control of their creative direction.

It was portrayed in the move as a fractious split, though Hurby was shown to be a far more complex and business savvy character than just a greedy heel. He cooked up the idea to pair two women is a diss rap to counter Doug E. Fresh.

Unfortunately for his girlfriend Cheryl (Salt) he had an eye for other women and broke her heart, creating a rift between himself and Sandy (Pepa) who was on to his playboy ways.

As luck and planning collide, their single which was being sent round by Hurby to radio stations finally hit. The film shines when the two girls lose it as they are chatting and listening to the radio when their song comes on, in Pepa’s old broken down car. The moment is everything a great biopic needs, when your hard work is being recognized and the joy of that very first breakthrough.

Some rough patches here and there and stage imposters aside, these girls never looked back.

If you were around in the late 1980’s and 1990’s, you likely know that the music of Salt-N-Pepa dominated the airwaves and videos as one of the first all-female rap groups.

Their catchy beats and on-point lyrics about sex and one-upping the men with a little backatcha objectifying was what the hip hop world needed, as the two spit the praises for the opposite sex in catchy hits like “Whatta Man” and “Let’s Talk About Sex.”

They busted down doors for other female rappers like Lil’ Kim, Queen Latifah, Missy Elliott and more. To this day, the world of hip-hop owes a debt to the Grammy Award-winning group for showing how hip hop was an original art form and stylistically lucrative genre of music, and uniquely American at that.

They were the first female rap act to go platinum and snagged multiple awards, as director Mario Peebles (he also has a cameo, cast as Cheryl’s charismatic preacher) makes sure the film has performances of Salt-N-Pepa’s greatest hits, including: “Let’s Talk About Sex”, “What a Man”, “Shoop” and “Push It”.

The film has a strong emotional punch and reinforces the value of female friendships through all the noise that life brings, from carefree days as single women, to becoming working mothers, and navigating bad marriages, and men with anger and fidelity issues.

It’s a perfect Saturday night film. Make sure you have a box of tissues handy for the final reunion award show scene.