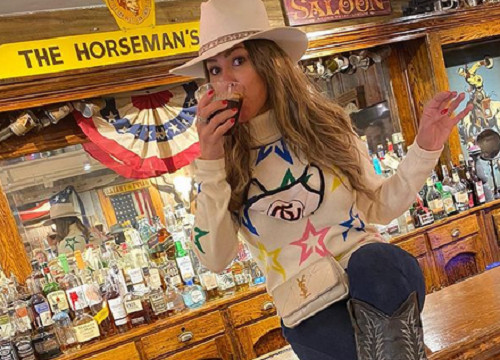 Kelly Dodd made some controversial comments at The Real Housewives of Orange County Season 15. TV Shows Ace previously reported that the reality star shouted “I’m Black!” in the upcoming preview for part two of the reunion. But during Wednesday’s broadcast, Kelly went on the attack. She slammed host Andy Cohen and called him “anti-American.”

Now, the television personality is revealing whether she regrets the remark. Kelly sat down for an exclusive interview with E! News. She wants to clarify both of the comments she made during the RHOC Season 15 reunion on January 20. Kelly got into a heated exchange with the Bravo boss, which could cost her her job.

On Wednesday night’s show, Kelly Dodd addressed her controversial comments about the coronavirus pandemic. Andy Cohen noted that she receives a large “amount of messages” that claim she’s “uneducated” and “behaving like a moron.” The RHOC star felt jilted and decided to fire back.

“I get them too, saying that you’re anti-American,” Kelly told Andy. “That you put your political beliefs out there, that they don’t want to watch a political show.”

During her interview with E! News, Kelly said she “didn’t mean” to make that comment. She also didn’t want it to turn into a political argument. The Bravo star was trying to make a point about the social media comments. According to Kelly, everyone gets their share of hate on social media.

“I’m a Libertarian, I didn’t vote for Trump. I’m not a Trumper at all,” Kelly admitted. “But I am a Libertarian so I do have conservative views on things but I am socially liberal. I believe in gay rights, I believe in abortion.”

Kelly also claimed that the “majority of comments” she receives “are positive.” However, she doesn’t regret making the “anti-American” comment. She didn’t like how Andy mentioned the hate she was getting. It’s common for celebrities, reality stars, and other public figures to get negative comments.

Kelly Dodd got her share of backlash for this comment. In the preview, Shannon Beador said she was called a “racist” and a “homophobe” by another cast member. Then, Kelly Dodd screams, “I’m Black!” This caused backlash among viewers. In her exclusive interview with E! News, Kelly explained what led to that moment.

“So we have Braunwyn who is blond-haired, blue eyes, as white as can be,” Kelly said. “She’s always saying that I’m a racist or a homophobe and it really irritates me. So I did a 23andMe and I don’t identify myself as a Black person, that was not my point. My point was I’m Black, Asian, Mexican, Spanish, I’m 30% Native American and I’m one percent Jewish. And I’m all races.”

The Positive Beverage founder says she doesn’t “see people with color.” Rather, she sees people as they are. But some would argue that Kelly can’t relate to those communities because of her privilege. Part two of The Real Housewives of Orange County airs Wednesday, January 27 at 9 p.m. ET on Bravo.