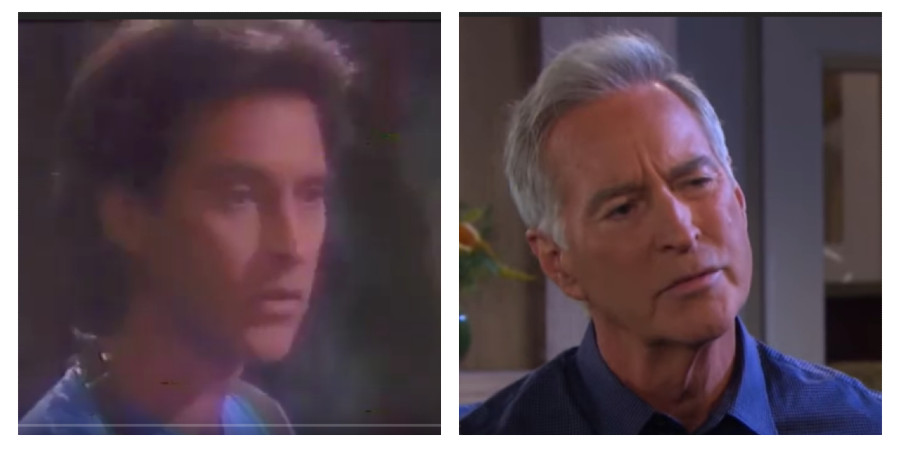 Drake Hogestyn has been an Alamain, a DiMera and a Brady during his time on Days of Our Lives. And he has been embodying the same character for three decades. What’s in a name, after all? A lot, if you’re an amnesiac priest-ISA agent-art thief who took his name from a war memorial.

2021 marks the actor’s anniversary with the daytime soap. Do you remember some of his most memorable storylines?

Twitter user @Joeiscool1981 is a huge DOOL fan. With permission, clips from Drake Hogestyn’s many faces of John are sprinkled throughout.

Marlena and Roman were one of the most popular super couples of the 1980s. What was Days of Our Lives supposed to do when one-half of the couple (Wayne Northrop) chose to leave the show? Hire Drake Hogestyn and see if he has any chemistry with Deidre Hall (Marlena.)

And that is exactly what the soap. No one foresaw that Drake Hogestyn would still be on the show 35 years – and many character plot twists – later.

From “The Pawn” to Roman Brady

In early 1986, Drake Hogestyn made his debut on the NBC daytime drama. An amnesiac with a new face, the character was dubbed “The Pawn.” Unhappy with the name, he renamed himself “John Black.”

On this day in 2009, Marlena tried to reach John and remembered their “first date” which aired on February 12, 1986. He was John Black, the Pawn, at the time. #days #Jarlena pic.twitter.com/FcJrMKy1QD

But he would soon have his third – but definitely not last – name. As his therapist, Marlena tried to help him regain his memory. But they fell in love instead. It was then revealed that he was actually a presumed-dead Roman Brady.

And they lived happily ever after. For a few years. Until actor Wayne Northrop came back to the show to take over as Roman Brady again. Where does that leave Drake Hogestyn?

DOOL couldn’t have TWO Roman Bradys on-screen at once. So Drake Hogestyn’s version went back to being “John Black” brainwashed into thinking he was Roman Brady.

On this day in 1992, John had a huge surprise for Marlena, Carrie! Marlena and Carrie reunited for the first time since her “death” in 1986 😍😍😍😍😍😍 #days #Jarlena pic.twitter.com/v5wa4Sr9Ft

Since Marlena stayed with Roman, John Black reconnected with Isabella Toscano (Staci Greason.) It was around this time that he found out about his connection to yet another family in Salem.

However, the character decided to stick with “John Black” instead of taking on the name Forrest Alamain.

On this day in 1995, MarDevil plotted revenge against John, and morphed into Kristen. No one hated John more than the devil #days #Jarlena pic.twitter.com/KjLYPPw6h2

Throughout his time on DOOL, Drake Hogestyn took on many careers as John Black. During the storyline with Princess Gina (Kristian Alfonso,) John Black was an art thief. Years later, he was a businessman and founder of Basic Black company.

20 years ago today, we first heard John’s idea to open Basic Black! He wanted his kids to work their way up and run it one day. Marlena loved the idea 😍😍😍😍😍😍 #days #Jarlena pic.twitter.com/vRrA2AWStu

But in 1995, John Black was also known as Father John Black. That’s right – he was a priest. He used his skills to free Marlena from the demonic possession courtesy of Stefano DiMera. At one point, John Black believed he was Stefano DiMera’s half-brother.

On this day in 2008, RoboJohn fought through Stefano’s brainwashing and had a brief memory of Marlena #days #jarlena pic.twitter.com/4gVvfBv2lX

After 3 decades, Drake Hogestyn is still playing John Black. Despite all the crazy twists and turns, DOOL fans still adore John and Marlena. However, they went up against a force in 2020 that gave John Black a whole new personality that had nothing to do with being brainwashed.

During an argument with his step-daughter Sami (Alison Sweeney,) John suffered a brain aneurysm. He fell into a coma and when he woke up, he was not the easy-going nice guy Salemites have always known.

In fact, the “new” John Black was quick to anger and violent.

While fans enjoy Drake Hogestyn, they aren’t enjoying Angry John. Soap site Soap Hub conducted a poll with its readers. Over half of respondents miss the old John.

Whatever DOOL writers throw at him, Drake Hogestyn hits it out of the park. That’s not surprising, considering he used to be a pro baseball player.

On this day in 1998, John went to the pier because he was missing Marlena. As he was remembering the night she came back to him there, Marlena showed up and went straight into his arms #days #Jarlena pic.twitter.com/tCzzctr51I

January 2021 marks 35 years since Drake Hogestn made his DOOL debut. Congratulations on this huge milestone and here’s to 35 more years of the incomparable John Black!

Days of Our Lives airs weekdays on NBC. You can also watch Drake Hogestyn in a recent Hallmark Christmas movie.