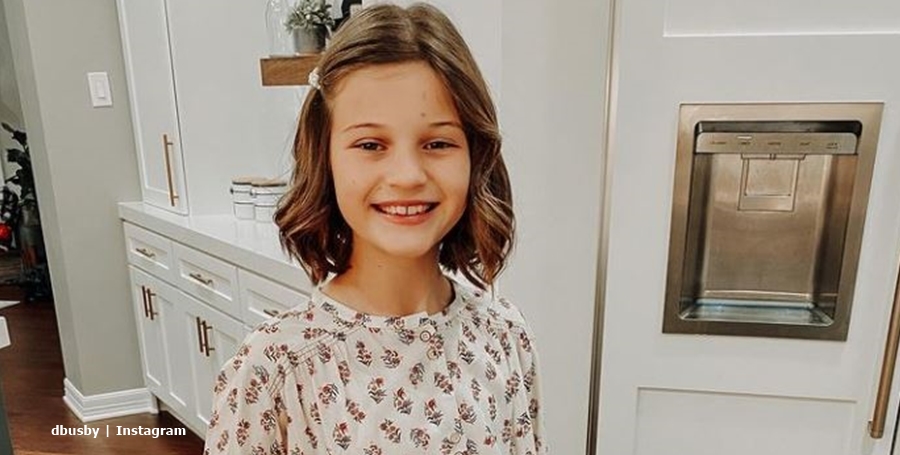 Blayke Busby is slowly blossoming into a beautiful young lady. Mind you, the adorable growing girl is the spitting image of her mother Danielle. And, OutDaughtered fans have nothing but positive things to say about Danielle’s appearance. Fans suspect Adam and Danielle are in for a world of trouble as Blayke heads for those teenage years.

We reported that the quints learn ballet now. Unfortunately, Riley fell and cut her head when practicing in the bathroom. But, the good news came that the TLC crew filmed them at ballet lessons. So far, fans didn’t see Blayke dancing, and it’s not clear she also learns ballet. But on January 22, Danielle let the news slip that she takes dance lessons.

Fans also know that Blayke plays basketball these days. New to the sport, the OutDaughtered parents seem very proud of her. Adam and Danielle proudly told their TLC fans that her very first game brought a win to the team. As she started playing the game with her cousin McKenzie Mills, perhaps they both also learning dancing together. Balance and poise won’t hurt Blayke Busby with her basketball ambitions either.

Danielle shares about her beautiful Blayke

Fans suspect great things are waiting for Blayke Busby in her future. Likewise, they can’t get over how grown she is becoming. In the photo that the OutDaughtered mom shared on Instagram recently, her daughter wore her dance outfit.

Danielle captioned the photo with, “Now this is how I see my Blaykers, a little dancer 💕. Still have a few weeks of basketball left, but dance is what’s next for BB.” And in her hashtags, Danelle said that it’s her very first time.

OutDaughtered fans chatted about Blayke Busby in the comments. Collectively, fans used a variety of words complementing the young Busby.

One OutDaughtered fan talked about the benefits of dancing. They wrote, “Dance is EVERYTHING! It helps so much with balance and coordination and is a great foundation for sports like ice skating, skiing, wind surfing, gymnastics etc. 🤗💖”

Meanwhile, other fans liked that the quints and Blayke Busby learn dancing. Hopefully, fans see all of them as they learn their new moves when the new season arrives in 2021. In the meantime, no doubt Adam and Danielle’s League City home’s full of dancing and prancing kids.

Are you surprised by how grown Blayke Busby looks in this photo? Share your thoughts with us! And, stick with us for the latest Busby related news.