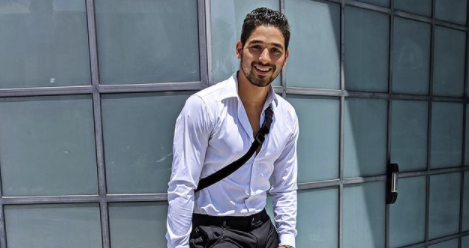 The past year has been difficult for many of us, even celebrities. Dancing With The Stars Season 28 champion Alan Bersten recently said goodbye to one of his biggest supporters, his grandmother.

“This was my Baba Raya unfortunately she passed yesterday. She was truly my biggest supporter. She believed in me like no one else,” Alan began his emotional Instagram post. “Every time she saw me she would scratch my back. I loved that so much. She would do everything she could to show her support and show how much she loved me. Something I will never forget is how when I was around 11 years old she was watching Dancing With The Stars, she told me one day you’re gonna be on there, and I’m gonna watch you!”

“Without me knowing it, that statement would change my life forever. I’m so glad I was able to make her proud! She was able to watch me do what I love, and honestly its because of her encouragement and support. I hope we can all look at each other and be as supportive as she was. We need to help each other grow and care for each other. I’ll love you forever Baba Raya! Thank you for believing in me. Rest easy ❤️😔”

“Baba” means “grandmother” in many Slavic languages. Alan Bersten is of Russian descent.

Before he was on Dancing With The Stars, Alan Bersten competed on So You Think You Can Dance Season 10 when he was 19 years old. He made it to the Top 12 before his elimination. Season 10 also featured future DWTS stars Jenna Johnson, Hayley Erbert, Brittany Cherry, and Paul Karmiryan.

Afterwards, he auditioned for DWTS and made it on Season 20, as a troupe dancer. In Season 25, he began his journey as a competing pro. Alan competed in all subsequent seasons, even taking home the Mirrorball Trophy in Season 28 with partner Hannah Brown.

Although losing a loved one is never easy, Alan likely has some peace of mind knowing Baba Raya lived to see him win one season of Dancing With The Stars.

Alan isn’t the only Dancing With The Stars pro to lose someone this month. Keo Motsepe recently updated fans to let them know his mother passed away a few weeks ago. This is a difficult time, but DWTS cast members have said in the past that the show is like one big family. Even though Alan and Keo are suffering through a lot of heartbreak right now, they can always rely on their co-stars to lean on.