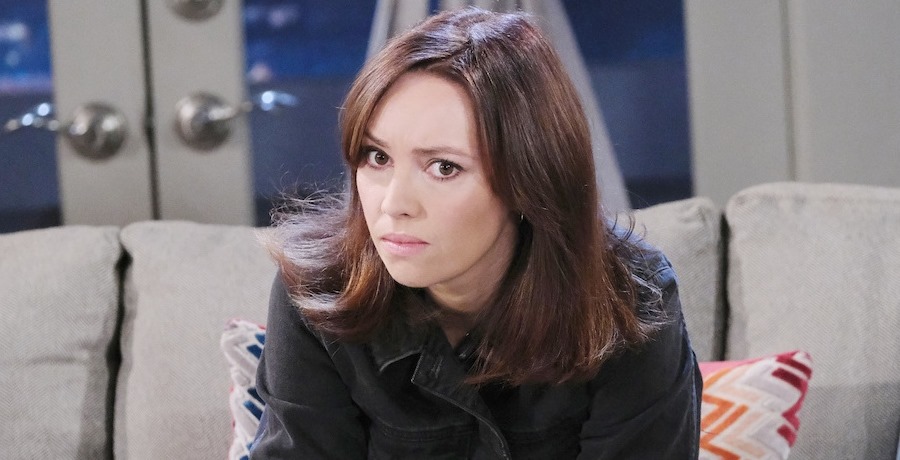 Days of Our Lives spoilers confirm Gwen Rizczech (Emily O’Brien) revealed herself to Jack Deveraux (Matthew Ashford) as his long lost daughter – but who’s her mother?  We have yet to learn the sorted details of Gwen’s past. Even with the bombshell she dropped on Jack, it still doesn’t explain her extreme plans to destroy her half-sister Abigail Deveraux’s (Marci Miller) life. Nor does it explain why she’s not targeting her half-brother JJ Deveraux (Casey Moss) at all.

However, the burning question on DOOL fans’ minds right now is who Gwen’s mother is. Here are a few women with ties to Jack and Salem that very well could be Gwen’s Mommy Dearest on the NBC soap.

Days of Our Lives spoilers proved Gwen Rizczech is, in fact, Jack’s daughter. Fans have long speculated she was Jack’s daughter, and now it’s confirmed. Still, we don’t know the circumstances surrounding how Gwen was conceived. She has a British accent, so logically her mother would be British.  However, it just as plausible she was raised as a child there and picked up the accent.

Days of Our Lives fans recall Jack Deveraux was raised in a wealthy family. Perhaps Jack went to boarding school or college in London and had a child with women during those years. However, that would make Gwen much older than her half-sister Abigail. Since they are close in age, that theory seems less likely.

Days of Our Lives casting news reports Laura Horton (Jaime Lyn Bauer) returns to Salem early next month. No doubt this has DOOL fans chattering that she might be Gwen’s biological mother. Of course, that would make her Jennifer Horton’s (Cady McCain) half-sister and Abby’s half-sister and aunt.

Days of Our Lives spoilers remind Laura and Jack had a steamy affair decades ago when they both were patients at The Meadows (a mental hospital). Both used aliases. Laura went by “Monica,” and  Jack was known as “Clarke”.  The two never met prior.  Neither knew their shared connection to Jennifer. So when Jack bedded Laura, he had no idea he slept with his mother in law.

Since Laura spent most of her adult years doped up on meds and in treatment facilities, it’s likely she gave birth to Gwen during those years and has no memory of birthing a child. Gwen no doubt seeks revenge on the two sisters who had the life she wanted.  In her mind, Gwen resents her mother for abandoning her.

Spoiler Pic for Thursday. 😯🙈
It's about to go down in Salem
Reminder: #days is not on Wednesday pic.twitter.com/Fw3YOWCIJ5

Days of Our Lives: Gwen’s Mom Could be Another Horton Besides Laura

Jennifer Horton and her mother, Laura Horton, aren’t the only Horton ladies  Jack Deveraux was romantically involved with on Days of Our Lives. Jack was at one time engaged to Jennifer’s cousin Melissa Horton (Lisa Trusel). Melissa is Maggie Horton (Suzanne Rogers) and Mickey Horton’s (John Clark) adopted daughter. Melissa stood by Jack when the marital rape of Kayla Brady (Mary Beth Evans) threatened to end his political aspirations.

Once Melissa realized Jack was only using her to up his odds of winning the election, she called off the wedding and immediately left Salem for years. Certainly, enough time to have Jack’s love child and give her up for adoption in a foreign country like England.

This would make Gwen Maggie’s granddaughter, Jennifer’s cousin, as well as Abby’s half-sister. No doubt this would be a great twist for DOOL fans leaning towards Gwen Rizczech being Laura’s daughter. Additionally, it opens the door for the writers to bring Melissa Horton back to the NBC soap canvas.