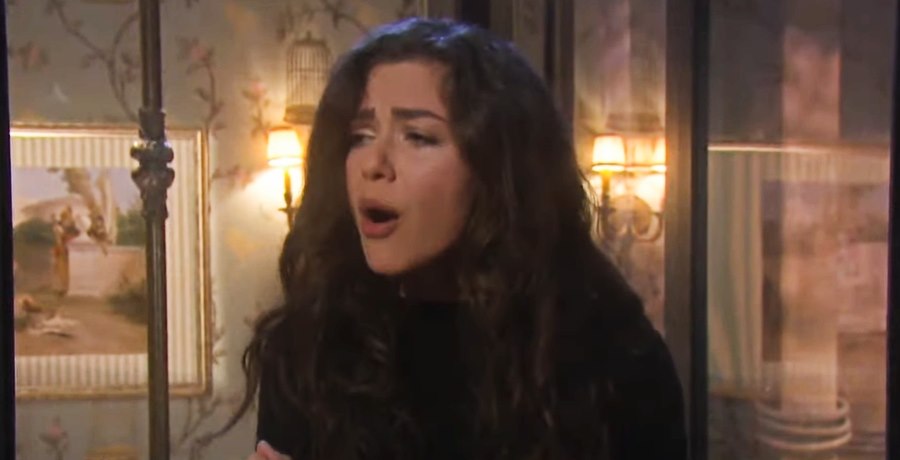 Days of Our Lives spoilers from a newly released promo video reveals Ciara Brady (Victoria Konefal) is very much alive. Also, in the video, the mob returns to Salem to even the score. However, the intended target is not the one that gets taken out. Here’s a sneak peek of the action-packed week ahead in Salem on the NBC soap.

Days of Our Lives Spoilers: Ciara Brady Alive – Who Has Her?

Days of Our Lives spoilers from the newest promo video prove Ben Weston (Robert Scott Wilson) and his mother-in-law Hope Brady (Kristian Alfonso) was right. Ciara is alive. Once again, Ciara finds herself held captive. This is kind of old hat for the newlywed. After all, she’s been a kidnapping victim more times than you can count just these last few years alone.

So now it’s only a matter of time before Ciara is found. However, who has her and why? Days of Our Lives spoilers remind Vincent Belman (Michael Teh) originally snatched Ciara. He’s in jail and told the Salem PD that Ciara died in the explosion. But that was a lie. Vincent’s henchmen Rhodes (Jason Downs) has her all these months. It seems as long as the checks keep coming, Rhodes has no reason to free Ciara.

Other spoilers from the Days of Our Lives promo show the mob has arrived in Salem to settle the score with Philip Kiriakis (Jay Kenneth Johnson). After Xander Cook (Paul Telfer) dissolved the shell company Philip used to launder the mob money, it was only a matter of time before they called in their debt with his life.

However, Chloe Lane (Nadia Bjorlin) asked her ex-hubby (and Philip’s nephew) Brady Black (Eric Martsolf) to help Philip get out of the mess he’s in. Now it looks like the price of his help might be his life. Bullets fly, and a Kiriakis man is shot. Will Brady pay the price for Philip’s poor judgment?

Days of Our Lives: When Will Ben Be Reunited With His Wife?

We now know Ciara is alive, but how long will it be before Ben and Ciara are reunited? Fans of the couple dubbed CIN are hoping it’s not too long. In fact, a Valentine’s Day reunion would be the most romantic time for the couple to be together again.

Certainly, fans want to see them happy. And of course, the dream sequences a few months back with a son named Beau coming true would be ideal for bringing this couple to super couple status before the end of the year.

Adam & Danielle Busby DRAGGED For Getting ANOTHER Designer Dog
See New Photos Of Lawson Bates Like You’ve Never Seen Him Before
Audrey Roloff Reveals Why She Kept Her Pregnancy A Secret
Blake Moynes Jokes About Possible Third ‘Bachelorette’ Appearance
OH NO!!! One Of Todd Chrisley’s Children Confirms Divorce