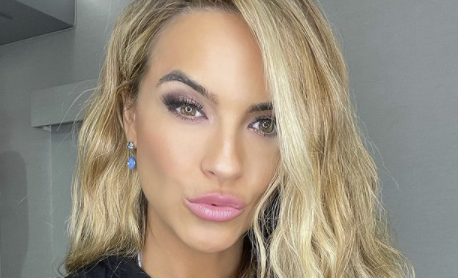 Selling Sunset star Chrishell Stause is not here to play games. A fan recently made a jab at her following her divorce from This Is Us star, Justin Hartley and Chrishell was there to shut them down.

For context, Chrishell wanted to get in on the latest meme craze. She recently posted a photo on Instagram of the Selling Sunset cast — complete with Senator Bernie Sanders and his mittens.

“Ok I HAD to 🤣🤣🤣 Welcome to the team Bernie!” she captioned the photo.

People on both sides of the political spectrum have had fun this week posting Bernie Sanders memes and photoshopping him into photos. In other words, photoshopping Senator Sanders into the Selling Sunset cast is not indicative of Chrishell’s political views. However, some fans took the opportunity to slam her anyway.

“Now I understand why your … ex hubby divorced your ass,” the user wrote, as reported by Us Weekly. “You dumb fool.”

“It’s true. I guess I am exposed. I was internet memeing too much,” Chrishell reportedly clapped back.

Luckily, most fans thought the meme was hilarious and all in good fun. Many actually said they wished he could join the cast of Selling Sunset.

So how do you feel about Chrishell’s meme and how do you think she handled the feedback? Be sure to let us know in the comments.

Justin Hartley who? Chrishell Stause seems to be in a much better place these days. Justin and Chrishell finalized their divorce this month. Fans didn’t believe they would reconcile, but it’s officially over now.

But that seems to be for the best. The two both moved on and are seeing other people. Right now, Chrishell Stause is in a relationship with Dancing With The Stars pro Keo Motsepe. They met while competing on Season 29 in 2020. Chrishell’s pro partner was Keo’s best friend, Gleb Savchenko.

While many people speculated Gleb and Chrishell were dating behind the scenes, that rumor actually wasn’t true. Instead, it turns out she and Keo were the hot item. Their relationship is a few months old now and they are reportedly doing very well. They went on a couple’s vacation with Gleb and his girlfriend, Cassie Scerbo. Afterward, Chrishell and Keo spent Christmas together.

Keo’s mother passed away earlier this month. Chrishell Stause can certainly relate to such a heartbreak — she lost her own mother last summer. While the circumstances aren’t exactly happy, the two are reportedly bonding over shared grief.

Many fans agree that Chrishell Stause seems more confident now that she and Keo are together. In any case, she certainly had no trouble clapping back at one fan’s rude comments.

Are you excited about Chrishell and Keo’s relationship? Let us know in the comments!

Would Matt James Have Proposed To Serena P.? Fans Think So
Hazel & Uncle Dale Get ‘OutDaughtered’ Love
‘Real Housewives’ Spin-Off In The Works With Some Of Your Faves
Is Now The Time For Matt James & Heather Martin?
‘Unpolished’: Foxy Grandma Shares Dating Advice