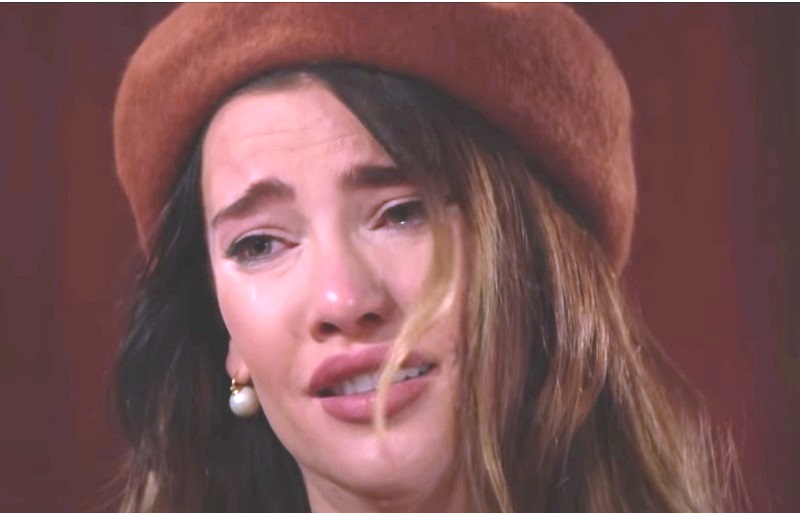 Bold and the Beautiful fans get ready for another Steffy goes to Paris scenario as Jacqueline MacInnes Wood is close to her real-life birth. But what does Steffy Forrester take with her on the trip this time around? Possibly the results of a switched paternity test? Here we go again?

The B&B spoilers hint at Steffy planting her feet on the other side of the ocean while things at home get messy. It seems Hope Logan (Annika Noelle) can’t take Liam Spencer (Scott Clifton) back. She can’t be sure Liam won’t run to Steffy again if things get tough.

Thomas Forrester (Matthew Atkinson) jumps at the chance to be around Hope after hearing what Liam did. But it looks like he goes about this a little differently this time around.

Bold and the Beautiful Spoilers – Steffy Forrester, Two Men, and a Baby

B&B spoilers suggest this paternity test has more twists and turns on the way. It looks like Finn (Tanner Novlan) still worries over Steffy’s reasons for wanting him in her life. He wants to make sure that she’s not with him only because Liam is not available.

He says all the right things and hopes for the best, that Steffy is carrying his baby. But there’s nothing set in stone with these two so the future could change for Finn if Liam’s the baby’s dad.

It looks like Steffy heads for that famous Paris trip again. The Bold and the Beautiful deja vu scenario sounds a little different this time around. Jacqueline is slated to be gone until sometime in the spring.

A trip to Paris can only mean one thing to fans – the baby is Liams. With Hope Logan booting Liam to the curb and Steffy headed to France, Bold and the Beautiful spoilers suggest Liam finds himself alone.

Bold and the Beautiful spoilers suggest the soap gets a lot of mileage out of the saga of the unknown father. They also suggest another tampering with the lab test that determines the paternity.

This could go one of two ways it sounds like. Some B&B spoilers point to Thomas switching his sister’s test results that flag Finn as the baby’s dad. He could change this to indicate Liam as the father.

This keeps Liam away from Hope for Thomas to better his chances at getting the woman of his dreams. Then of course if Liam is the father, there’s Finn who might do the tampering.

He’s right there in the hospital as a doctor where the lab results sit. That shouldn’t be so hard to physically do. But does Finn have a devious streak in him?

You have to admit Finn looks too honest of a guy to switch lab tests… today. But the Bold and the Beautiful spoilers do hint at a dark side of this good doctor emerging.

Bold and the Beautiful spoilers bank on Thomas waiting with open arms crossing his fingers that Hope comes running. But in the coming weeks, B&B fans get to know his thoughts as his buddy Vinny Walker (Joe LoCicero) hangs around more than usual.

Spoilers suggest Thomas bounces his thoughts off Vinny. While he wants to make a play for Hope, he thinks it needs to be Hope who makes the first move. After all, she is still married and he promised to respect that.

As Bold and the Beautiful fans witnessed this week with Thomas, all he’s done so far is lend his ear to Hope. He’s made no advances but still assures Hope he cares about her. In Hope’s eyes, that’s more than her husband can say.

As Zoe Buckingham (Kiara Barnes) swoons over Zende Forrester (Delon de Metz) a missed text proves Zende does care. While Zende turned Zoe down, the message that she never received has him begging Zoe not to spend the night with Carter Walton (Lawrence Saint-Victor).

Of course, this text comes to Zoe way too late as the deed is done a few times over by now. But knowing that Zende felt this way confuses Zoe even more. Bold and the Beautiful spoilers put Zoe navigating her sister Paris Buckingham (Diamond White), Carter, and Zende while deciding on her future.

There’s plenty more to come on the Bold and the Beautiful in the next two weeks as the extended family all takes turns confronting Liam. It gets to the point where Steffy needs to remind these loved ones that it took two to tango.

Kody Brown Feels Like A Failure As A Plural Husband
See The Love Between Beau Clark And Baby Hartford
‘Sister Wives’ Fans Think Kody Brown ONLY Loves Robyn
‘7 Little Johnstons’ Season 9: Canceled Or Renewed?
Could Michelle Young Be The Next Bachelorette?