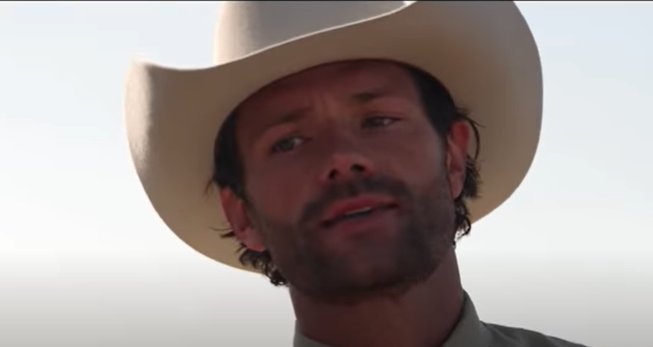 Tonight, the CW will premiere their new series, Walker, starring Jared Padalecki. Walker is a complete reboot of the successful ‘90s series Walker, Texas Ranger. The original series starred Chuck Norris, with his signature karate moves, taking down criminals and fighting for justice. But this series is different, Padalecki describes the show as a family drama instead of just another cop show. “There’s a reason we call it Walker, not Walker, Texas Ranger because it refers to the whole Walker family.”

Walker will tackle current issues including immigration, police tactics, politics, grief and family relationships. “It’s more a show about how people in these times can deal with very human issues as opposed to ‘good guy beats up bad guy.’”

The Supernatural star has high hopes for the series because this show inspired him to continue acting. After fifteen seasons on Supernatural, Jared said, “I’m tired of people looking at me. I’m tired of setting alarm clocks.”

“I’d often say I wanted to retire, especially from the acting portion of the business,” Jared admitted. But during filming the final season of Supernatural when the opportunity to reimagine the character of Cordell Walker appeared. Padalecki said, “At first, I just really wanted to develop this story about this version of Cordell Walker.” And this role gave Jared the chance to take on a project that he “really wanted to be a part of.”

The show again is not a retelling, it is Jared said, a reimagining. The series opens with the murder of the central character, Cordell Walker’s wife, Emily Walker. In the trailer we see Cordell speaking to Emily on the phone when gunshots can be heard. At the time of her death, Cordell was embroiled in a long-term undercover operation. and so, the guilt and grief-stricken widower has to return to normal life to take care of his two teenage children.

But he finds a very different department upon his return. His new partner, Micki Ramirez, is played by Lindsey Morgan from The 100. Mickie is one of the first-ever female Texas Rangers, so she wants to prove herself in this established institution. But she finds it difficult when she finds herself reigning in Cordell as he gets rough with a suspect that talks about his wife. She understands he is hurting but she needs to know she can count on him. “You’ve got a sad story. I get that. And I’ve got your back that is my job, but I need to know you have mine.”

Bringing it all together

But soon Cordell becomes convinced there was a deeper reason for her death. He confides in his brother Liam that, “Some things don’t add up!” Liam, played by Keegan Allen from Pretty Little Liars, is an assistant DA. He also stepped in to help Emily with the kids while Cordell was undercover. Taking on that responsibility has bonded Liam and his nephew and niece. And the latter doesn’t seem particularly open toward Cordell. But as Liam watches his brother fall apart, he tries to pull him back from the edge, “You are chasing ghosts.” He pleads with Cordell to let Emily go. “You hear me when I say this, you will lose everything.”

But is Cordell wrong about the circumstances of Emily’s death? The trailer certainly indicates that something smells funny in Austin. Larry James, Cordell’s former partner is now his captain and may have a few secrets of his own. So, it is even more suspicious when he calls Liam and tells him Cordell “requested drone footage from the night of Emily’s death.” Walker looks to have all the drama fans could possibly want. And it provides a true “Texas cowboy” justice moment with Jared chasing down a suspect on horseback and lassoing him and all.

The show also boasts an impressive cast of familiar faces. The line-up almost seems like a CW reunion of sorts. The show has Padalecki from Supernatural, Morgan from The 100, Jared’s wife Genevieve Padalecki, from Supernatural, and Odette Annable from Supergirl. All these recognizable faces indicate the CW likes to keep their actors around. But other big names in the cast are just as impressive including Mitch Pileggi from Sons of Anarchy, Molly Hagan from Jane the Virgin, and Coby Bell of Burn Notice. Walker boasts no shortage of talent. Jared Padalecki even teased saying, “Oh, Jensen [Ackles] will be on the show.” He firmed up this assertion with “even if I have to drag him kicking and screaming.”