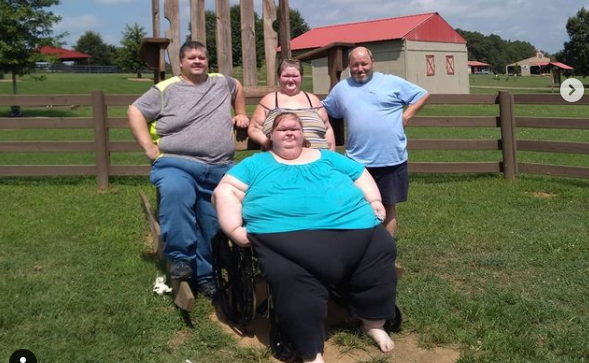 While the new episodes of 1000-Lb Sisters portray the family to be in the midst of chaos and anger, there’s a different, more light-hearted story being told. In fact, according to Amy Slaton’s Instagram, the sisters are kicking it barefoot and pregnant in the country.

Note that this story contains spoilers for 1000-Lb Sisters.

Sisters are Barefoot and Pregnant Down South

This week’s episode of 1000-LB Sisters left many fans on edge. Is Amy okay? Did she lose the baby? We can officially report that Amy appears to be fine, healthy, and visibly still pregnant. The younger Slaton sister posted on her official Instagram account yesterday, sharing some fun family photos. In her snaps, Amy, sister Tammy Slaton, brother Chris, and Amy’s Husband are posing in front of a giant rocking chair. Etched into the chair itself are the words, ‘Southern Belle Barn.’

The caption on the post tells us that the clan is apparently on vacation. They have traveled all the way from their home in Kentucky to McDonough, GA. While there they took the time to visit the lovely landscapes of Southern Belle Farms.

In the photos, everyone is smiling, appearing to be having a great time. Chris, Amy, and Amy’s husband, Mike, lean against the oversized rocker while Tammy sits in front of them in her wheelchair, barefoot, as usual. Lush green grass, rolling hills, blue skies, and a picturesque country backdrop created a lovely setting for their family snap.

While fans and followers were happy that the family is enjoying some time away – and even happier that Tammy was able to travel – the post left them confused. The last we saw of the Slaton sisters on the show, their lives were in chaos, between Tammy’s escalating weight and health issues and Amy’s cliffhanger pregnancy issues. So, it wouldn’t seem they’d be planning a vacation. So ,what’s going on? Well,  reality shows are filmed sometimes months in advance. Producers can sometimes turn one or two events into several episodes, so what we are seeing on the show right now may have actually happened several weeks or even months ago.

If we are judging by Amy’s baby belly – there’s probably hardly a gap at all. Which hopefully means good things for this family.

The fact that the family is enjoying a fun, country vacation is actually a positive sign. After Tammy’s bombshell news, the fact that she is getting more activity shows she’s got fight left in her. Considering the doc warned her that losing mobility pretty much means the end for her, any activity is a plus.

Additionally, the fact that the clan chose to take a trip and all appear smiling and happily tells followers that perhaps Tammy and Amy Slaton have worked out some of the stressful relationship issues they were having. As Amy told the camera during an interview last episode Tammy is “her best friend.” She doesn’t want her to die. Perhaps the reality of Tammy’s health and Amy’s pregnancy has motivated them to work on their health AND relationships.

Are you excited for the next episode of 1000-Lb Sisters? We are too.

Check in with TV Shows Ace to get all the latest news on your favorite reality stars, including the Slaton Sisters!