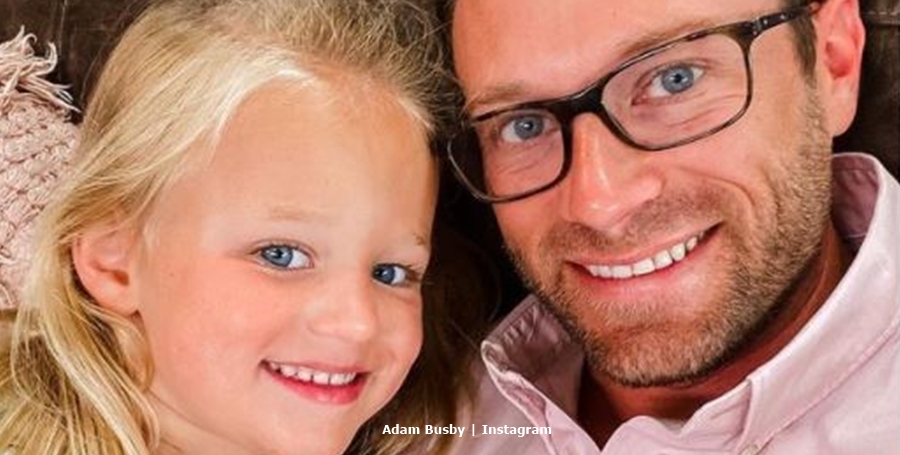 Riley Busby fell while dancing in the bathroom. So, her dad, Adam Busby, rushed her to the ER. There, they checked her out and put in a staple. Between Danielle and Riley, Adam said he felt “done with hospitals.” Now, Adam updated and said the staple got removed. But not without some trauma and tears for the cute OutDaughtered star.

Adam Busby documents the ER trip for the nasty-looking wound

We reported that when Hazel fell in the bathroom, her dad said she ended up with a “small gash” in her head. But, thinking she might need stitches, he rushed her to the ER. Plus, he worried about concussion. Better safe than sorry in the case of little kids. Anyway, it seemed not too serious. But she required a staple. Actually, poor Riley looked a bit shattered by the fall. And, the gash looked very painful.

Now it’s all, over, Adam took her back to the doctor so they could remove the staple. Well, it didn’t go too well, and Adam said both he and Riley ended up in tears. The OutDaughtered dad shared a photo of them together. In his caption, he wrote, “Brought this stubborn little thing to get her staple taken out today. Who would have thought, this staple would have been more stubborn than her!” Next, he noted, “We were both in tears through the process, but that’s now behind us.”

Staples basically replaced the old commonly-used stitches. physicianoneurgentcare.com explains that while stitches still get used, staples are often useful for deep wounds. Often they use them in areas where stitching presents some difficulty. Plus, the doctors apply them quickly. And the chances of infection are lower. Healthline says, “It’s usually not painful when your doctor removes your surgical staples.” So maybe Riley Busby’s staple came out with difficulty for some reason. Plus, she’s a young girl, so going to the hospital may scare her.

Over on Adam’s Instagram post, fans commented on Riley Busby and the tears. One of them suggested, “Oh Riley I bet that stubborn Staple was stuck on your gorgeous hair.”

Another OutDaughtered fan noted, “As a wound care nurse myself I can say that usually when the staple is really in there like that after its course it’s because the wound healed so incredibly well. That’s excellent tissue regeneration 😉 Add it to her resume.”

Many fans told Riley that she’s the cutest and the bravest little girl.

OutDaughtered fans heard that the TLC show returns in 2021. The premiere date never came out yet. But, fans can’t wait for it. Sometimes. Adam jokes about it being “the Riley show.” It seems she hold s a lot of ideas on what and how the crew should film everything. Mind you, these Busby kids literally grew up in front of the cameras. With six years of experience behind Riley Busby, she probably knows quite a lot about reality TV. Maybe fans see her visiting the ER during the show.

Jill Duggar & Derick Dillard Are ‘Content’ But May Be Growing Their Family
Did Online Hate Cause Rachel Lindsay To Delete Her Instagram?
‘Love After Lockup’: Update On Kristianna’s Mom’s Health
Lifetime’s ‘Brutal Bridesmaids’ May Convince You To Elope!
Rumors Fly Michael Strahan Taking Over ‘The Bachelor’ After Emmanuel Acho