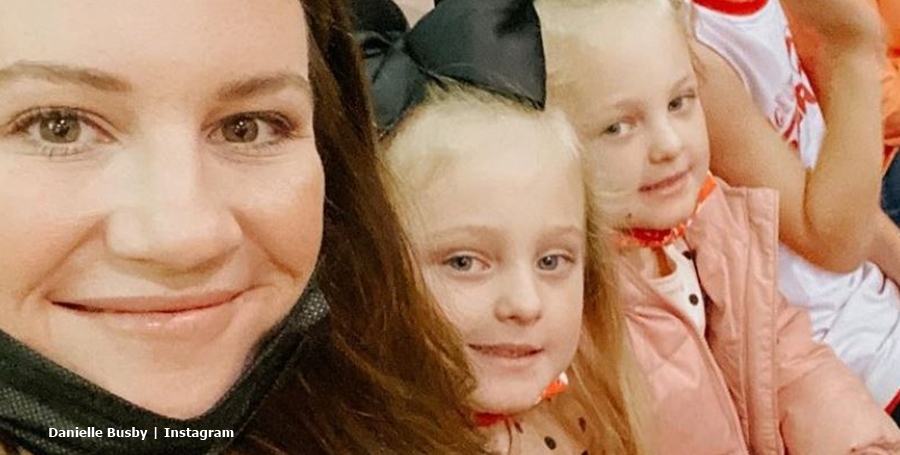 Danielle Busby leads a busy life with her quints Ava, Lulu, Riley, Hazel, and Parker. Plus, big sister Blayke needs her share of mom’s time as well. On top of that, she runs her Graeson Bee clothing store and her Cadi-Fitness line with her twin sister. Now, she shared a bit of info about being inside a day in the life of the Busby family. And Lulu was naughty but funny.

Danielle Busby, a day in the life, features Lulu being naughty

Danielle and Adam Busby never had a boy. But when you raise six kids, maybe there’s just no room for more. Of course, the OutDaughtered mom underwent a hysterectomy. So, she can’t make more babies. But she and Adam discussed the possibility of adopting. TLC fans know the couple always hoped for a son. And in fact, Graeson Bee’s named after the son they never had.

Some fans might argue that Ava and Riley sometimes act like tomboys, so maybe a boy full of mischief isn’t a requirement. Now, Lulu did something that boys often think is hilarious. Taking to her Instagram Stories on January 19, Danielle Busby shared a few photos of the kids and talked about naughty Lulu. One of them featured Beaux dog. Another one featured loving quints. And the final one told the story about Lulu.

The first photo that Danielle posted told a story. Inside their home, little Beaux sprinted toward Danielle, with a big grin on his doggie face. His tongue out, behind him, Riley, Parker, and Hazel turned and watched him. Obviously tired out from play, the dog ran to his mama. Danielle captioned it with, “Save me mama.” Next, she revealed a photo of her cuddling up with the kids. And she captioned it with “After school hugs.”

But Lulu took it away with what she did next. Danielle Busby described how she went into the bathroom. The next thing, in came Lulu who said, “mama.” Maybe expecting Lulu to ask a question, Danielle “looked at her.” Then, to the amusement and shock of her mom, she “straight up farted.” The OutDaughtered mom said, “Y’all so gross! But I laughed so hard!” Now, that sounds like something a naughty boy might do. But girls might also get a giggle.

While most kids enjoy a giggle when someone farts, as they grow up, boys tend to retain their juvenile hilarity about it a bit more. IGN Board followers discussed it and certainly, while some women laugh, a lot of them think it’s pretty disgusting. One of them said, “I thought that the only guys who found farts funny were 16 or younger.” But some men complained that their girlfriends got all in a huff when they did it.

Actually, many people find it rather offensive. However, it seems almost universal that many people can’t help but giggle or laugh when it goes down. For kids like Danielle Busby’s daughter Lulu, it seems it doesn’t matter whether they’re boys or girls. The idea of flatulence simply seems way too funny to pass by an opportunity to get rid of that gas.