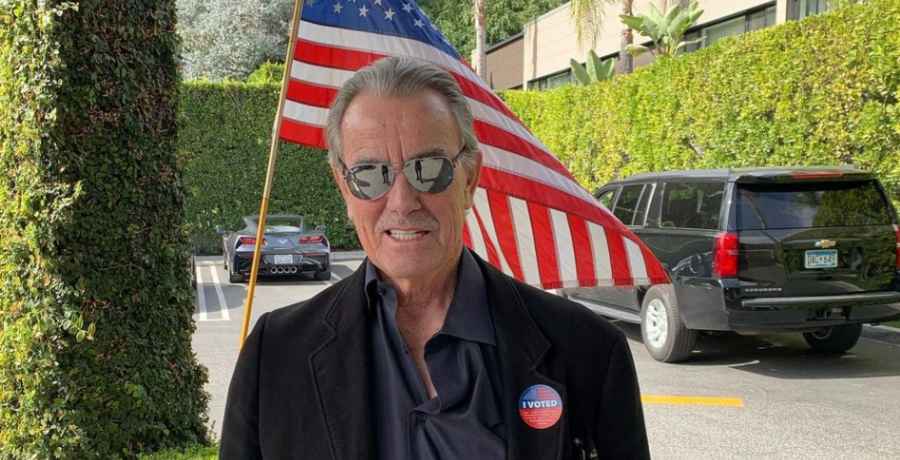 It’s almost a year since the COVID-19 pandemic began in the U.S. All along, The Young and the Restless star, Eric Braeden has kindly urged his fans to follow the guidelines that keep us safe from the virus. This includes social distancing, wearing masks and hand-washing. The actor who plays Victor has now received the first shot of his COVID-19 vaccination and is urging fans to do the same.

The U.S. started doling out the COVID-19 vaccine in late December. Now, Eric Braeden has received his first dose. He instantly went to social media to urge his fans to do the same when they can.

On Instagram, Eric posted an image of himself standing outside the hospital where he received his first dose of the COVID-19 vaccine. He can be seen wearing a KIN95 mask, as Americans are urged to continue wearing masks until the vaccine truly kicks in. He is holding a card as proof of his vaccination. In his caption, Braeden wrote, “I got mine, try to get yours!!”

Many of Braeden’s The Young and the Restless fans also follow him on Twitter. Sharing the same image, Eric tweeted, “Got my first one.” He added the words, “Nothing to it!! DO IT!” One of his followers commented that he must know someone to have received the vaccine so quickly. The actor responded, saying he didn’t and that he just took a chance.

He wrote, “You know, I had none!” he replied. “Just took a chance going down there and stood in line! Was about to turn around when I thought, ‘Hell no, stick it out!’”

California is one of many states opening up for COVID-19 vaccinations for anyone 65 or older. This is despite whether they have co-morbidities or not. Each county in California has a different supply and different guidelines, with some only giving the vaccine to those aged 75 and over. As The Young and the Restless star is 79 years old, he apparently qualified.

The actor who plays Victor has also been selling masks with his character’s image, emblazoned with the words, “Wear the damn mask! You got that?” The masks are very comfortable and come with adjustable ear straps for the perfect fit. He also brought out a range of Christmas masks and masks to urge people to vote in the presidential elections.

Meanwhile, while Eric has received his first shot of the COVID-19 vaccine, a second dose is required to achieve maximum immunity. As noted by Soaphub, it reportedly takes several weeks for the body to build up antibodies after each shot. However, at least fans know their beloved soap star is on his way to the normal life we can all look forward to.

Carlin Bates Slammed For Exploiting Layla In New YouTube Video
Why The Details Of Josh Duggar’s Arrest Are A Bit Fuzzy
Meri Brown’s Best Friend Jen Ends Up With Egg On Her Face
‘Seeking Sister Wife’ SPOILER: Is Kaleh Still With The Clark Family?
Demi Burnett Doesn’t Back Down On Reality Steve