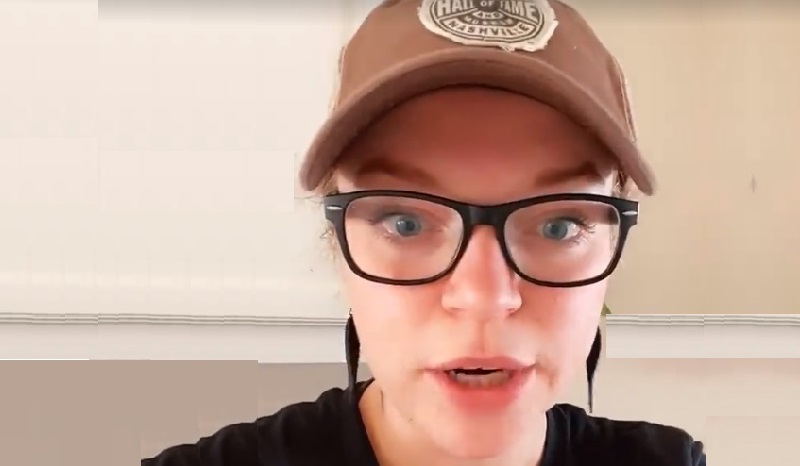 Sister Wives celeb Maddie Brown Brush reveals how she found herself stunned by her own behavior while at home recently. She also took the time to post a video explaining that she now has a grip on things.

Sister Wives –  Maddie Brown Brush Gets It Together

This adult daughter from the Sister Wives show is quite clever which makes her entertaining with her little clips on social media. Maddie has a lot on her plate with two little ones at home.

What she’s been through with her toddler daughter in the last year came along with lots of worries, so she’s a mom who knows the toll of extra stress. It sounds as if she took a short breather as the calendar turned over to 2021.

Today this young mom from Sister Wives reports she’s got a grip on things. Not only does she look healthy and rested, but she also appears extremely happy on her latest video as well.

Has Maddie Looked In The Mirror Of Life Yet?

The more you see of Maddie Brown, the more she reminds you of someone else from the Sister Wives series. There comes a time when many women look in the mirror and see their own mother staring back at them.

It’s not known if Maddie has looked into that mirror of life yet, but the fans have done that for her. They see Sister Wives star Janelle Brown in a lot of Maddie’s actions and behaviors.

That’s a good thing, according to the fans’ comments, as Janelle is a Sister Wives fan-favorite. Maddie is upbeat with her posts, much like her biological mom Janelle.

Maddie is very active on social media. She frequently gives her fans updates on her daily activities. Recently the Sister Wives followers were thrilled with the clips of little Evie Brush walking, running, and dancing.

Evie did this on her own without assistance from anyone. After all this little girl went through, hearts melted to see her doing these activities like any other toddler.

Sister Wives – Young Mom Stuns Herself In Her Own Backyard.

Today Maddie entertains her followers with an Instagram story. She shares how she’s stunned after she caught herself doing something she thought she’d never do.

One might argue there’s a little bit of her Sister Wives mom coming through in this activity. Maddie found herself spending time preparing a garden spot for the spring. Viewers of this TLC series know how much Janelle loves her garden.

Maddie said this is something she wouldn’t even entertain doing just a few years ago. But today she’s even figuring out how much space she has and what she can fit in there.

Maddie Brown Brush sounds like she’s also inherited her Sister Wives mom’s knack for numbers as well. Fans love Maddie so much that they want to see more of her.

Many Sister Wives fans advocate for a spinoff show for the adult Brown kids with Maddie, Caleb, and their two children featured. Now that sounds entertaining.

Gleb Savchenko Comments On Chrishell Stause’s New Romance
Jeremy Vuolo Goes Back To College & Back To His Roots
Ashley Iaconetti Of ‘BIP’ Shared What Scared Her Early In Pregnancy
Courtney Waldrop Says Rawlings Is Left Out Of Latest Family Function See Why
Courtney Waldrop Rushes Rawlings To Hospital, Leaves In A Cast