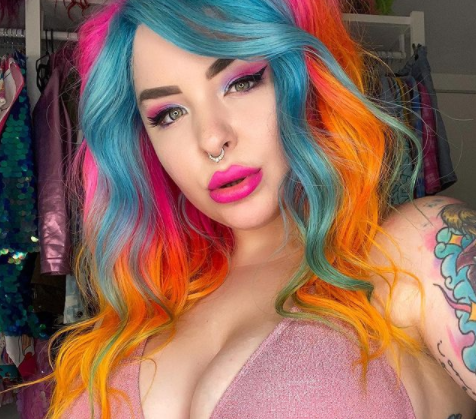 Former 90 Day Fiance cast member, Erika Owens is used to dropping jaws wherever she goes. Today, she was dropping jaws for a whole new reason. Read on to find out why Erika’s fans are scratching their head in confusion.

Fans who follow former 90 Day Fiance cast member Erika Owens typically tune in to her Instagram for her zany fashion and fun photoshoots. The 23-year-old Instagrammer summoned a different vibe with her followers today when she got real about her birth control choices. The post, which was a sponsored content partnership with Natural Cycles, an app-based, hormone-free, birth-control method.

In her post, Erika is laying on her bed, in her jammies, with no makeup on. She looks up at her camera smiling and holding up her pink Natural Cycles thermometer.  In the long post accompanying the photo, Erika shares what she calls her ‘birth control journey.’

According to Erika Owens, she began taking hormonal birth control to not only avoid pregnancy but to also help regulate period pain. She reveals that unfortunately, the side effects were more than she anticipated.

She goes on to praise the Natural Cycles company, telling fans how thankful she is that they created the app. Erika Owens credits the app and birth control method for teaching her ‘so much’ about her own body. Furthermore, she says the best part about the system is that it’s ‘all-natural’ and doesn’t fill her body with synthetic hormones.

While the majority of Natural Cycles users are utilizing the sciences to avoid unwanted pregnancy – there are some who utilize the program for just the opposite. According to the App’s official website – when you are ready to get pregnant – you can ‘use the science in reverse’ to HELP become pregnant. While Erica Owens does not really give any information that would support the fan theory – many followers have voiced their suspicions that the Instagrammer is potentially trying to conceive.

Erika had a very public breakup with former girlfriend, Stephanie on 90 Day Fiance. However, Erika quickly moved on to a new love. She is currently dating her boyfriend, Chris Siclari, and many sources are reporting that the two lovebirds appear to be quite serious about sharing a future together.

This combination of a new, serious relationship and a sudden partnership with a birth control app that doubles as a fertility calendar, really has fans scratching their head. Is she pregnant? Is she trying to get pregnant? The truth is – no one knows yet. Erika has kept this part of her personal life quiet,

Erika Owens’ Followers Not Happy with Her Natural Cycle Partnership

In addition to fueling pregnancy rumors, fans had a lot to say about her promotion of the company in general. Many fans were actually quite miffed by her choice to partner with Natural Cycles.  They strongly felt that she and the company were broadcasting inaccurate information.

Many of Erika’s followers were upset by the Natural Cycles website. Natural Cycles site and the Erika’s post both say that women can only get pregnant for 6 days during their cycle. In fact, according to the NHS, women can get pregnant at any point of their cycle. There are, however, some days when their bodies are more fertile than others. Sperm can live inside the body for several days. So, even if you are not super fertile at the time, your body can keep the sperm in swimming condition for up to seven days.  This might flow over into a more fertile span of your cycle.

Followers were quick to point out the misinformation in the post and voiced that they also were not happy about her promoting a birth control that is only 93% effective – based on the Natural Cycles own site info.

Where are you on the topic? Money making a partnership or pregnancy announcement in disguise? Tell us your thoughts in the comments!

As always – come back to our homepage daily to get the latest news on all your reality shows and stars.