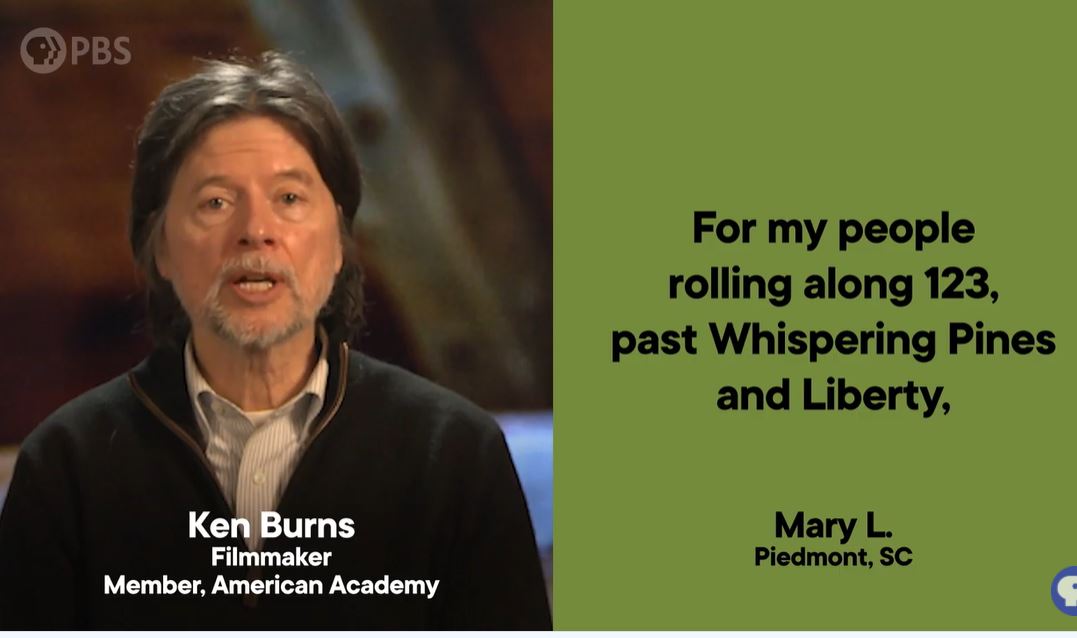 Today is MLK. day, and the struggle and the achievements are at the top of many Americans’ minds as we transition from the Trump presidency to the Joe Biden presidency. We wonder what is to come, and what is to heal our nation so deeply divided. PBS has a project which is an ongoing initiative as PBS American Portrait, the national storytelling documentary series has released a new video.

In the new video, many notable PBS stars as well as academics and more are featured reading segments of a poem by Pulitzer Prize-winning former Poet Laureate of the U.S. Natasha Trethewey. The prose gives everyone a moment to pause and reflect who we are as a nation and what we want to represent to the world.

For the past year, PBS American Portrait has captured thousands of stories from everyday people who shared their visions for America, with the goal of answering the question “What does it mean to be an American today?”

Timed to MLK Day today, network debuted a video recording of a special, crowd-sourced poem curated by  The piece, titled “Remix: For My People” is an epic collective effort authored by the American public.

PBS provided TV Shows Ace the full transcript of the poem, posted below.

Back in November, Trethewey edited the submissions into a cohesive narrative poem, read on video by some of the most influential writers, scientists, business leaders, actors, and artists of our time, intended to capture the story of this unique moment in American life

Who participated in the poem recitation?

“Responding to Margaret Walker Alexander’s classic poem, ‘For My People,’ this new poem is a compendium of voices — a collective poem written by Americans all across the country to celebrate and pay homage to our shared and diverse communities–our people…I think that at this moment it can stand as a sober and joyful testament to our tumultuous time — a kind of inaugural poem for this new beginning–written not by a single poet but made up of a representative cross section of American voices highlighting not only the individual or separate challenges in our communities, but also our shared experience as Americans.”

Courtesy of PBS: Remix: For My People—after Margaret Walker Alexander

For my people on the front lines of hospitals, grocery stores, and classrooms;

tiny white hospitals with no room for COVID patients,

scattered homes with no wifi, and beautiful fields

with monstrous prisons; my people

For my people dancing in Atlanta’s sultry streets, chilling in Marion, Ohio,

in cleansing deep-South waters, rising to stitch and gather,

marching with one voice, building with faith-strong hands;

For my people rolling along 123, past Whispering Pines and Liberty,

interrupted by hay bales and truck farms as the leaves orange

of poets and tomorrow and people; who hunch over desks

staring at screens flickering and buzzing like neon; my people

waiting to laugh in a booth or grasp a hand

or for a reason to drive—or a destination;

For my people by rivers and lakes who have made cities home,

where the Allegheny, Monongahela and Ohio meet, three bodies deep,

where the Mississippi courses through silt loam and tamaracks,

where the memory of Lake Texcoco waves

For my people who sit at bedsides, a draft coming through the window,

reading stories from pages turned years ago; my people

who scrub floors on their knees with Ozick in their ears,

who kiss boo boos and slammed fingers while dreaming of lifelines

in the red tinted darkness, bright eyes in the lamplight blinking in time

with the future coming down the tracks, echoing

hollow in the divots between the ties;

For my people, all of us who find ourselves caught by a simple thing:

the sight of a bird, tenderness, bare feet on cool cement, shade and water

and sitting close together;

For my people who found connection in dingy bars; who built families out of nothing,

and who loved against the law, dancing until the sun rises,

justice, joy and liberation, their fists high in the sky; for my people,

be they weak or be they strong, whose feet blister and arms ache

from carrying the burdens of ancestors;

for the mothers who buried their children; for the fallen, for every

my people, ready for revolution;

For my people shamed for their languages—shut up, beat up, tongues cut up—

my people who survive, who rebuild, who imagine again and again,

my people who rise up and create through the heaviness,

singing the jibaros’ songs and toiling day in and day out;

For my people, the kids called Gringo in one home, illegal & unwanted

in the other, who understand two cultures, those who knew—

as soon as they could read—what payments and taxes are,

who know being bilingual is an asset

but are afraid to be harassed speaking Spanish in a store, my people

with a foot in two worlds who created their own culture;

For my people who don’t fit in, always looking for a place to belong,

the queers and the femmes and the failures, the artists and the activators,

and choosing a family in whose arms we can rest;

For my people whose homeland was lost, who fled with nothing,

who crammed into tiny apartments and worked dead end jobs;

who impressed on their children the value of education;

my people cramped in steerage, separated by language, united

by poverty and religion and food and song, my people lifting us

with callused hands to be doctors lawyers leaders artists professors and

resistance, and radical hope; for the land we were born to;

my people who survived and thrived in spite of…;

my people diverse in politics and tolerance; my people

weary and suspicious of much, yet grateful for this new home;

For my people blasting jazz and rock and hip hop, classical and soul and funk,

using the rhythms to shake the demons of times past, to revel in the joy

of the present and blessings of the future; my people ever mourning

ever tear full, asking why and what and where to; my people

ever seeking ever hopeful, knowing not the time

their turn will come—

Let the spaces made empty, fill:

for all of us

every word a sepulcher, every syllable a stone rolled away

—Curated and assembled by Natasha Trethewey

This is PBS’ most ambitious multiplatform project in its history. A digital-first initiative produced with RadicalMedia, American Portait began by engaging Americans to share their experiences, hopes and values on the web platform.

And with miniseries Self Evident, several public art installations and murals were commissioned in neighborhoods across America; additionally educational materials on media and storytelling from PBS LearningMedia were distributed; and three broadcast specials aired throughout 2020.

In addition, hundreds of videographers across the country collected submissions from various communities.

The project also has a published book to be released following the release of the four-part documentary series.

Leveraging the local reach of PBS through its member stations, PBS American Portrait is a mosaic of our country’s diversity by connecting tens of thousands of people across the country with one communal voice through individual stories of joy, hardship, triumphs and sorrow.

Participants will be able to tell and share their own stories, and see the stories shared by a wide panorama of Americans, united by a series of prompts that will serve as conversation starters, including: “Now is the time…,” “My American dream…,” “To me, work means…,” “My life right now…,” and “Looking ahead, I…” were added more recently to collect submissions for the upcoming PBS American Portrait docuseries.