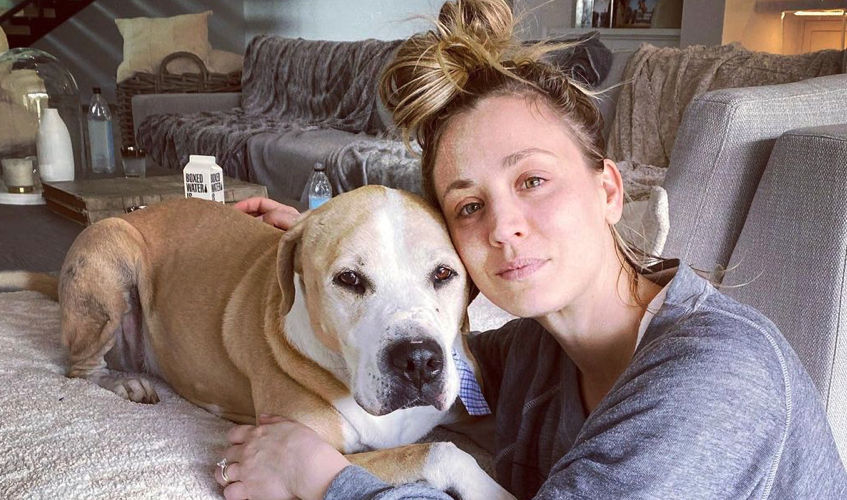 There has been an overwhelming flood of love and sympathy sent to Kaley Cuoco, since she announced the death of her beloved dog, Norman. On Monday, she went to Instagram to talk about this. What did she have to say?

On Saturday, Kaley Cuoco fans shared their sympathy to the Big Bang Theory star, after she announced the death of her beloved dog Norman. Cuoco had expressed that she was in “earth shattering deep gut wrenching pain.”

On Monday, the actress shared an Instagram story thanking fans for their love and support. She shared that she is “truly touched” after she received thousands of notes of condolences on her Instagram. She stated that she read each and one of the condolences.

Kaley was in awe of of the outpouring of love to her and to her beloved dog and soul mate, Norman. She wrote, “I’ve been reading comments, texts, cards, calls, flowers, I’m beyond touched.”

In addition to thanking fans, Kaley Cuoco also shared photos of “Norman’s Corner.” There, she created a special place for the flowers, cards, photos, drawings and other tribute gifts sent to her. She wrote, “Norman’s corner filling up by the hour! Truly touched everyone thank you!”

In addition, a baker sent her a blue cake that had “RIP Norman” written on top. In the middle was a fondant of Norman. Kaley wrote, “This is seriously adorable.”

In addition, an artist made a beautiful watercolor of Norman for the grieving Flight Attendant star. The likeness is spot on and clearly, Kaley was so touched. She featured that photo on one full page of her Instagram story.

Fans Have Made Donations

Norman was a rescue dog. Kaley has done a lot to help other dogs like her beloved Norman get rescued. The donations will certainly help other rescue dogs find their forever families.

Kaley Cuoco receives outpouring of condolence gifts after the loss of her beloved dog Norman https://t.co/vLnFcqZseT

How Is Kaley Cuoco Doing?

Fans may want to know how Kaley herself is doing. She shared a selfie, clearly still in grief. Above her photo, she wrote “You know that feeling when you cry so much that you don’t even know if your still crying.” (We can forgive her for using the wrong “you’re,” as she is clearly still grieving.)

Although Kaley and her husband Karl Cook have a cornucopia of rescue pets, Norman in particular was her constant. On Saturday, she eulogized him beautifully.

“Norman, you were my entire world for 14 years. Thank you for smiling at me as you left this world, confirming for me once again our language was ours alone. You will always have my heart.”