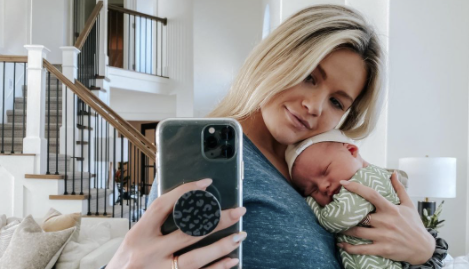 Anyone who ever went through childbirth knows how difficult it can be at times. Dancing With The Stars pro Witney Carson adamantly said she did not want a C-section. But birth plans don’t always go the way new mothers want them to go. She had an emergency C-section anyway and is still recovering two weeks after giving birth to her son, Leo.

“Finally wearing real clothes but still in a diaper 😂 healing from a birth is no joke!” the dancer captioned an Instagram photo. “So proud of this body and what it went through to bring this angel boy into this world. We are absolutely in love with you little Leo 😭🤍”

Witney Had A Long Labor And An “Unexpected” C-Section

A C-section may not have been part of Witney’s birth plan, but she’s just happy her baby is safe and sound. She recently posted an Instagram video depicting the hours leading up Leo’s birth.

“We waited so long for you baby boy! After 24 hours of labor, 2 1/2 hours of pushing, & an unexpected c-section we finally had you in our arms safe. This day was the hardest & best day of our lives. So in love with my little family,” she captioned it.

Witney’s husband, Carson McAllister, was born three weeks early and still weighed 9 lbs. That was what made the professional dancer initially decide she wanted a C-section.

“I asked my doctor about that and he said the best way is to be induced. He said there’s been a lot of studies about how they’ve had less C-sections with women who were induced versus women who waited until full-term — so that’s kind of what I’m basing my decision off of,” she said in an Instagram live at the time.

Baby Leo may only be a few weeks old, but he already has plenty of fans and even a new friend. Witney’s co-star and best friend, Lindsay Arnold, recently brought her own baby to see Leo. The two women organized an adorable newborn playdate for the babies.

Fans are already making plenty of jokes that the babies are in an arranged marriage. Even if they don’t get married someday, their moms are best friends so the children will likely grow up close.

But what’s ahead for the new moms?

Lindsay confirmed she’s already training to head back to Dancing With The Stars in the fall, but Witney hasn’t spoken much about her plans yet. Once she adjusts to motherhood, she may make a more firm decision. It would probably help to heal up and be out of the diaper too.

Did you miss Witney Carson on Dancing With The Stars last season? Do you hope she will return? Let us know what you think in the comments.