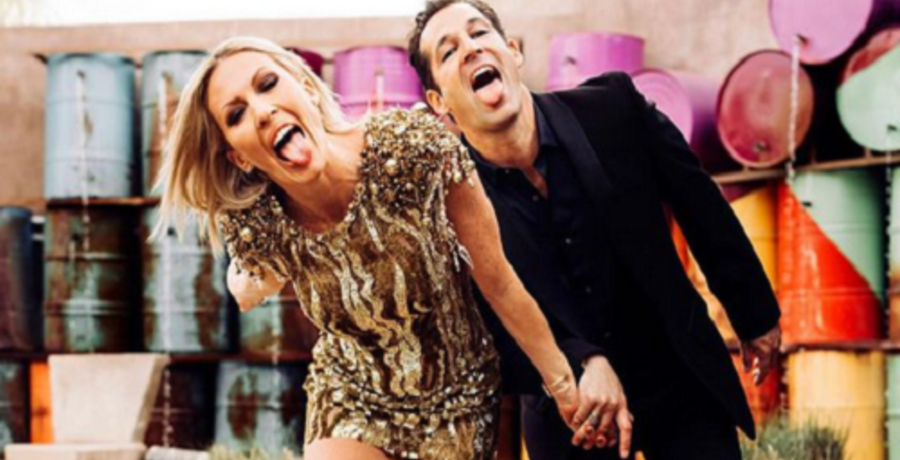 Sean Burke has been spotted with another woman. And now Braunwyn Windham-Burke is changing her tune. After 20 years of marriage, the couple has been embracing their “modern marriage.” Braunwyn announced her new girlfriend, Kris, after coming out as a lesbian.

She previously revealed that she doesn’t want Sean to date. At the time, her husband revealed that he wasn’t even thinking of dating someone else. Just weeks later, he’s been spotted with a mysterious woman. Now, Braunwyn is clarifying her previous comment about not wanting him to date someone else.

She also shared that she caught him with another woman in his bed.

Sean Burke gets “handsy” with a mystery woman

“He was with this girl making out, he was grabbing her a** and he was really handsy,” the insider continued. “They were very up against each other, hanging out.”

Previously, Sean admitted during an Instagram Live with Braunwyn that he wasn’t seeing anyone. However, the insider told the Daily Mail that the RHOC star has known about his new girlfriend. She even caught him in bed with her in their family home. Their relationship is only two months old.

Braunwyn has also told her co-stars that she is “done with Sean” and “never found him attractive.” It looks like their “modern marriage” could come crashing down. The 43-year-old said she wants to remain in an open relationship with her husband. But she would be “heartbroken” if he moved on with someone else.

Braunwyn Windham-Burke is still trying to redefine her marriage to Sean Burke. She admits that it’s a work in progress. The Real Housewives of Orange County star said they’re currently in marriage counseling. Braunwyn has jealousy issues which she needs to work on.

Earlier this month, she admitted that she would be “heartbroken” if Sean found someone new. Some of her RHOC co-stars and fans found the comment hypocritical since she’s been dating Kris for four months. But Braunwyn has clarified her statement.

“So yes, I would be heartbroken. Does that say that I don’t want to be happy?” the reality star told Us Weekly. “Of course, I do. I think it would be weird if I wasn’t heartbroken if my husband of 26 years fell in love with someone else.”

She also confirmed that the tech businessman has been dating other people. But “nothing serious” has come out of any of them.

“I think anyone in our positions would know that things are going to have to change, but it doesn’t mean it’s not hard,” Braunwyn continued. “This is me trying to balance the feelings and emotion of two people I really care about, and I think trying to keep some things private as a big part of that.”

Regardless, the couple still has “no plans” to divorce and are navigating their relationship. The Amplified Voices founder said that they’re trying to be open about their feelings with each other. They’re currently working on communicating and building trust through their therapist. Braunwyn and Sean can see themselves “sitting there in Hawaii, watching our grandkids play.”

‘Sister Wives’ Christine Brown Challenges Her Girls ‘To Create A Home’
Who Is Hallmark’s ‘When Calls The Heart’ Erin Krakow Dating?
‘Bachelor’ Jesse Csincsak: Fleiss Is The Problem, Not Harrison [Exclusive]
Stassi Schroeder Compares Her New Family To This Royal One
‘Doubling Down With The Derricos’: Deon Derrico Confirms Season 2?