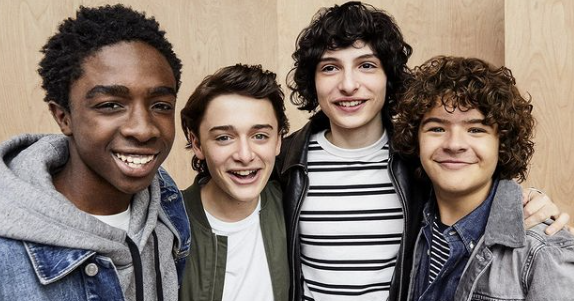 If you haven’t finished all three Stranger Things seasons, you may want to stop reading now. There will definitely be spoilers in the rest of the article.

Gaten Matarazzo plays Dustin Henderson in the hit Netflix show. He can’t spoil too much about the upcoming Season 4, but he did sit down with Us Weekly to discuss a few things. And he has just one word to share — “Yikes.”

“I think most would probably say it’s the scariest [season] out of the previous three, which I love because it’s very fun to film,” the Stranger Things star shared.

So What Can Fans Expect When Stranger Things Airs?

Fans that finished Season 3 know that Jim Hopper (David Harbour) possibly had a very grim exit. In fact, most of the characters believe he sacrificed himself to save everyone else. However, fans didn’t think the show would just kill off one of its most popular characters. And they were correct. In February 2020, a new trailer for Stranger Things Season 4 dropped, revealing Hopper is very much alive. But what exactly is he doing in the Russian wilderness?

“I guess most of the cast had a pretty good idea that he might be making a return, but they weren’t too sure about it from the beginning,” Gaten told Us Weekly. “By the time we had gotten to the table read [and] we had all started reading together, it had been pretty clear. But it was great to have it confirmed when we saw David there.”

Even though Stranger Things deals with a lot of dark content, Gaten says he and the rest of his co-stars just try to bring a positive experience to the screen.

“We don’t have to try too hard. We like each other, which is always a plus,” he said in the interview. “As well as having a lot of the heavy, dark stuff in the show, it’s surrounded by a lot of lightheartedness [and] a good amount of comedy. … We usually have a fun time on set.”

When Can Fans Catch The Newest Season?

In any normal year, Stranger Things Season 4 would already be out. But filming and production schedules got messy during the COVID-19 pandemic. Filming halted in March 2020 and didn’t pick back up until September. Right now, there is no official premiere date.

But fortunately for fans, the creators decided that Stranger Things won’t end with Season 4. The pandemic could have actually been a blessing in disguise. The creative team had more time to really think and plan about the show’s future. There definitely won’t be a rushed ending. While production stalled, the creative team was hard at work brainstorming new ideas.

What do you think will happen when Stranger Things finally returns for Season 4? Are you excited? Leave all your ideas in the comments. We’re curious to hear what you think.