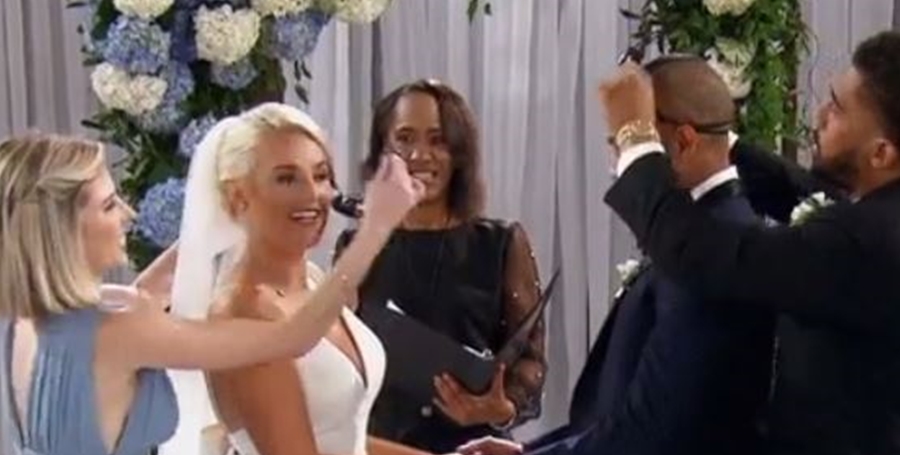 MAFS Season 12 fans seem a bit upset as the couples act almost is if there’s no such thing as COVID-19. The new season premiered on Lifetime on January 13, and so far, only one person spotted someone wearing a mask. Did the production team take any precautions? Or, will they discuss the virus? Perhaps the Married at First Sight production team cut out the pandemic. They might surmise that fans see enough of it in their everyday lives.

MAFS Season 12 – gatherings and no masks?

Backing-tracking a little, Lifetime fans see Paige and Chris aiming for a whole tribe of kids. So no surprise there’s an ex-fiance gestating his baby. And that reveals just one potentially drama-filled relationship. Or at least if Paige didn’t already know about said infant. Other couples include Ryan and Clara. Clara makes a clean break from her past failed relationship and looks for the experts to make things work for her.

At this stage, Briana and Vincent look reasonably matched. And, then Jacob at nearly 40 just wants to settle down. Meanwhile, Haley juggles trust issues. Then, Erik’s been married before and Virginia went through a string of broken relationships. And this all plays out during 2020, the year of the pandemic. As usual, fans see the Married at First Sight couples and families gathering. Did they take precautions? Some MAFS fans think not.

Some fans wonder about COVID-19 precautions

Over on Twitter, one person commented, “It’s hard to watch this episode. First, it’s way too long and second, I can’t get past all the gatherings and no masks.”

Then, another person noted, “So Ryan acknowledged that there was a pandemic going on during his wedding, so I renew & emphasize everything I’ve said about the masks thus far. The lack of masks makes [me] question the basic common sense of everyone on the show.”

However, one MAFS fan cut the production a bit of a break with this tweet:

Many more comments followed like this one: “Why aren’t more people wearing masks around ATL? Didn’t they film this season during the Pandemic?”

Precautions that the team took

Spoiler account @MAFSfan on Instagram dug around and discovered that the production team apparently took some precautions. In fact, they even employed seven COVID-19 compliance officers. One of them posted that compliance officers remained with the cast and crew of Married at First Sight “at all times of filming.” Plus space and “sanitation” were enforced. If the camera’ stopped “rolling,” everyone wore masks. Then, everyone underwent “regular” COVID-19 tests.

Still, fans of MAFS complained. One of them commented, “I watched five minutes and turned it off. I don’t care how many compliance officers you have – they were out in public with no masks or anything around restaurant and retail staff.” Meanwhile, another one said they only saw one and that came when a person at a bridal shop donned one.

Overall, most fans seem a bit irritated. After all, the virus doesn’t stop when the cameras start shooting.